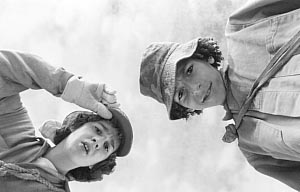 Disney Studios' Holes is a terrific film that will appeal to adults as much as to the older kids it's aimed at.

It begins in the cramped, cluttered apartment where young Stanley Yelnats (Shiala LaBeouf) lives with his grandfather, mother and inventor father (Henry Winkler).  His life drastically changes however, when he's charged with stealing a pair of sneakers and sentenced to 18 months at a boys' correctional camp.

As Stanley arrives at Camp Greenlake Juvenile Correctional facility he discovers it's like no other ordinary camp he's heard about.  First it's in the middle of the Texas desert and there's no lake or swimming hole to cool off in, or arts and crafts programs to keep him busy.  Instead the boys must dig holes for punishment and "to build characters."  They have to be precisely 5 feel deep and 5 feet in circumference.  The boys dig from morning to night in the hot sun and the only rest granted is when the water truck drives out to fill their water jugs.  They have all of the heat and dirt to contend with and, oh yeah, add in a healthy dose of scary looking yellow lizards running all over the place.

Mr. Sir (Jon Voight - sporting a mile high hairdo) runs the camp with an iron fist.  But, the real tyrant of the place is the Warden (Sigourney Weaver); she's so tough she uses rattle snake venom in her nail polish.

The story is interspersed with two different flashbacks, one in 1905 about a pretty schoolmarm (Patricia Arquette), the other about Stanley's great, great grandfather and a family curse delivered by Eartha Kitt.  The stories move back and forth between present day and the past and unlike most flashbacks, they're not hard to follow nor do they disrupt the flow of the main story.

The boys give each other nick names like "Armpit" and "Zero" and Stanley doesn't begin to feel part of the group until they start calling him "Caveman."  Each boy is distinguishable and they all give believable, down-to-earth performances.

For those of you who fear that a film about a bunch of holes dug in the desert is not something you'd be interested in, there's plenty of adventure and fun.

Based on the best selling book by Louis Sachar, this is a solid film version.  From the silly, over-the-top adult characters, to the troubled, yet sympathetic boys, it's all in great fun.  The clever multi-layered story fits together perfectly to make a wonderfully entertaining family film.