The Hobbit - An Unexpected Journey 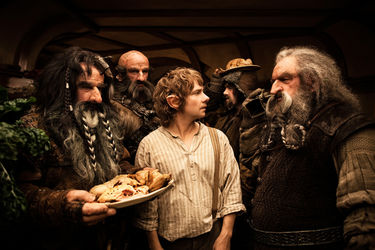 
Back in 1978 I reviewed The Lord of the Rings (1978) a film by Ralph Bakshi which was rich in background and expression through light and dark in an animated format. The Hobbit: An Unexpected Journey, is also filled with beauty both from natural settings and the creativity of special effects which are available for today's cinema.

Director, Peter Jackson grabs the Hobbit experience as he did The Lord of the Rings, filling it with a world of wonder and impossible locations driven by numerous characters which only exist in Middle Earth. This film is primarily a visual experience, the story is told by Ian Holm who sixty years before had the experience as a young Bilbo (Martin Freeman). The story could be quickly told in a few minutes but Jackson enhances the experiences for nearly three hours.

While the created world of Middle Earth is fascinating from time to time small events take a very long time to completion. Examples of that stretching are the dinner event as the Dwarfs join together at Bilbo's house, and the scene in which they all sing a song which could easily have been eliminated. Perhaps that introduces the characters, but it appears far too long. The game with Gollum (Andy Serkis) played with Bilbo is also long enough to be stagnant.

The characters who challenge the march of the Dwarfs towards the homeland of Thorin (Richard Armitage) where they wish to return it to its once powerful glory and dignity are significant. The battles on the mountains are fun to watch and some of the characters who challenge the dwarfs are comical in their prowess, the best example is the three trolls who act like the Three Stooges.

Jackson gives us a place of wonder, beauty, excitement far beyond any realm of reality, and that is exactly what we expect and want from the Hobbit experience. This is a grand slam but it takes the runners a little too long to circle the bases.