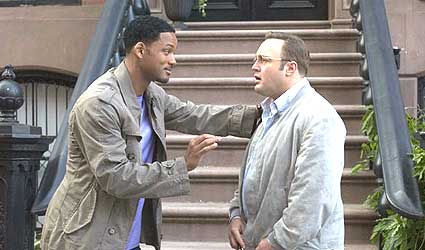 
Of course Will Smith can do action (I, Robot), animation (Shark Tale), and now romantic comedy in Andy Tennant’s Hitch.

As Alex “Hitch” Hitchens, he works “under the radar” as New York City’s "date doctor". This alchemist on the game of love has done well as indicated in the opening credits sequence, seeming to know how any guy can have his dream girl in just three dates. In the process of dating, “she wants to know the real you, but not all at once. It’s about the controlled release.”

The screenplay by Kevin Bisch comes from his own college experiences when women were using photo albums as a ploy to get him to kiss them. The cool Alex who works by referrals and from a swank command center sets up his clients dates with the latest computer technology. This comedy has a buddy element to it that works better than the one involving Alex himself who will rebound from a college heartbreak to go for that special relationship.

Kevin James (TV’s “The King of Queens”) is a meek, awkward, overweight accountant whose company consults for glamorous celebrity heiress tycoon Allegra Cole (super-model turned actress Amber Valletta of Raising Helen and What Lies Beneath). This Cyrano de Bergerac angle has some funny moments to it as Hitch helps James’ Albert get closer to that unobtainable true love. One sequence that Tennant confidently stages is one that shifts back between Albert’s date rehearsal and the actual appointment. For those who’ve seen him on the small screen, James has a flair for physical comedy and it comes into good use whether on the dance floor in a club or in an office setting.

The other aspect of the plot that grows from the film’s central thesis, about showing the best part (good and bad) of you, has Alex fixated on Eva Mendes' Sara Melas, a gossip columnist for The Standard, the New York Post’s chief competitor. The beautiful reporter called a cynical realist by her editor Max (Adam Arkin) will let down her guard after Alex gets her intrigued in a nightspot and out on the Hudson. She’ll bring out the vulnerable geek and more in this smooth operator.

What Tennant finds important that female audiences will like is the importance Hitch puts into satisfying a woman. There are gags, some expanded from the film’s trailer, that elicit much laughter, especially after some tasting at a food rave. But the charm is the sweet manipulative stroke that tries to balance what tests people in their professional and personal lives. Hitch languishes a bit as it needs to fulfill the needs of the genre through misunderstanding and turnabout, yet remains agreeable throughout.

Mendes and Valletta do enough twinkling with their characters when it comes to image and romance to make Smith (a producer here) and James look better, especially when on screen together. The sentiment builds from the accessible adorable goofiness also felt in the Reese Witherspoon vehicle Sweet Home Alabama. The Big Apple also is a character in this crowd-pleasing cinematic valentine with plenty of trendy downtown shots of Lower Manhattan contrasted with decorated, personalized interiors in Tribeca and Soho. Designer clothes, in varying fashions, make the men and women, as Albert dresses more quietly to move up in the world.

As Hitch puts it, “you only get one shot at a first kiss and it has to be your best shot.” The film invests much in the philosophy to make this point work that compares (or feels like a response) to last year’s 50 First Dates. The comedy comes off better from its romantic intentions and the way James lets loose at the finish he may be able to split up his time to get more laughs on the big screen.