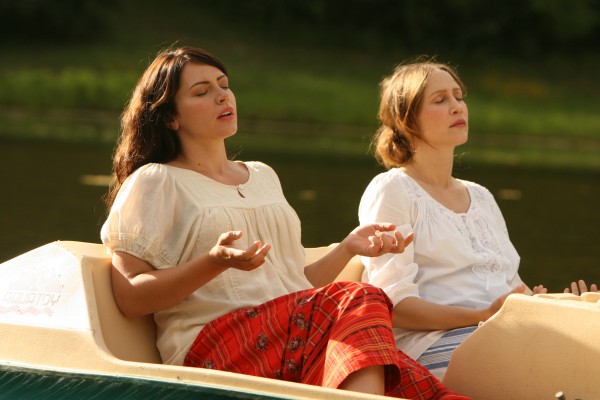 
Vera Farmiga's directorial debut is grounded with mindful mercy and prescience; a softly satirical drama that should go down well with those who can identify with the main character's struggles with love, human relationships, and God.

Higher Ground is a wonderfully nuanced film likely suited for art-houses, select upscale cinemas and university venues with a talented ensemble cast led by the director (seen earlier this year in the solid Source Code) herself.

The orbit of evangelical Christianity in a rural environment over roughly a generation is presented with hardly broad humor or heavy sentimentality as Farmiga works thoughtfully from co-writer Carolyn S. Briggs' memoir, The Dark World. It really doesn't come across as a film about theology or religion even with the extensive emphasis that the subject has on the community.

We see Corinne Walker grow up from a child and young adult (played by McKenzie Turner and strikingly by Vera's nearly spitting-image sister Taissa before Farmiga) navigating her way into the church from curiosity to threatening the more qualified of the clerical establishment. Here's cinema, contrasted with The Rapture, that is very learned through connecting with themes of conformity and dissent.

Higher Ground draws one into what it is to be "born again" but with a little twist that may be unsettling with certain practitioners as Hebrew-quoting Corinne starts to feel uneasy from what has brought her intense knowledge and gratification.

Norbert Leo Butz and Bill Irwin as Pastor Bud and Preacher Bill, respectively, locate a certain passion and charisma in their homilies with harmonist flair (and some guitar accompaniment). Ethan Miller, as played by Boyd Holbrook and, later, Joshua Leonard, is the handsome high-school sweetheart of a rocker who gets the pregnant Corinne more dedicated to the church. Dagmara Dominczyk imbues Corinne's close friend Annika with much carnal energy as more skepticism and contempt grows in a woman who has brought Jesus into her heart.

This is no glossing over stereotypes and the suffocating therein that leads to a resounding personal discovery. As Farmiga has shown from her first screen role in the low-budgeted Down To The Bone through films like Up In The Air" she more than responds to the respect her craftsmen behind the camera (like Martin Scorsese) and scribes have provided.

Corinne's admissions "play to the congregation" in an interpretative, meaningful way as questions raised have more impact than attempting to make statements about not sharing what many true believers have about their fundamentalist joy. In a tight-knit community touched by enormously by spirituality, a higher admiration is expressed with fair-minded naturalism on an exquisitely firm "Ground."