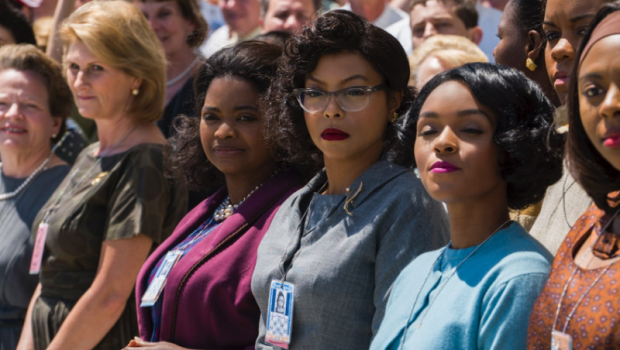 
A crowd-pleaser of a little-known bit of history around the U.S./U.S.S.R. space race in the early 1960s effectively takes into account gender, profession, and race. Without getting into the dark aspects of these issues, especially the latter.

Hidden Figures stars Taraji P. Henson, Octavia Spencer, and rhythm & blues artist Janelle Monae as women enduring humiliation before the Civil Rights era fully emerged in ways that could be considered in part an amalgamation of Apollo 13 and A Beautiful Mind.

A light-hearted mood with feel-good humor prevails in spite of the strife around these 'colored computers' with mathematical prowess in their connection at the West Computing Division to get into the elite rocket program to calculate orbital trajectories. Those which would be instrumental in (the now late) John Glenn's record-setting first path around the earth and subsequent missions.

The screenplay by Allison Schroeder and director Theodore Melfi (who did well with Bill Murray in St. Vincent) draws well from Margot Lee Shetterly's book of the mostly obscure black female statisticians during the segregated era. An early scene when the car of engineer aspiring Mary on the Mercury 7 project (Monae) breaks down and how it plays out sets the tone for what struggles combine with impassioned work ethic and integrity. Maybe with a little bombast from the way frustration can set in.

Glenn Powell appears as the famous pioneering U.S. astronaut who would become a senator as the title makes good on these determined ladies with levity coming from scenes like one involving a bathroom set to Pharrell Williams's 'Runnin' as he propitiously peps up the soundtrack while serving as a producer.

Being in the presence of a promising Monae, Spencer (whose Dorothy is like the supervisor with computer-programming for IBM on the horizon), as well as Henson with a supportive future husband uncomprehending of her aplomb in the language of sciences (Mahershala Ali of Moonlight) makes this eponymous group worthwhile and heartfelt. Even with little subtlety in steering from convention, but allowing for nary any condescension having a good share of higher knowledge on display like Howard's winning Mind and Alan Turing trying to crack the enigma code in the The Imitation Game.