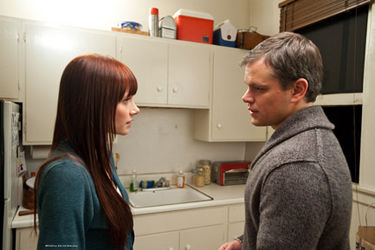 
Clint Eastwood's evolution is a remarkable journey from a tough cowboy on TV and in film along with Dirty Harry, to Hereafter is an extraordinary creative, emotional chasm that doesn't happen very often.

In Hereafter we follow the lives of Marie LeLay (Cecile DeFrance), Marcus (McLaren brothers) and George Lonegan (Matt Damon) who reaches from the living to the dead. Marie has experienced a near death event in a Tsunami and Marcus' twin brother Jason is killed in a car accident. Those events drive their lives almost to compulsion.

Lonegan has used his skill to reach messages from the departed and make a living, but the experiences haunt him and he has stopped helping people to reach out to the other side. Not to be mistaken with the series of horror films in which the dead talk to the living, Lonegan only relates simple messages from beyond which the dead person desires to be heard.

The process wears on Lonegan sufficiently to make him quit doing sessions and he works as a forklift operator living a lonely life in a small flat in San Francisco. He listens to books by Dickens and fights off his brother (Jay Mohr) who pushes to reestablish the business of contacting at very lucrative rates. Giving in to his brother he does a session for Christos (Richard Kind) that is helpful and accurate but Christos doesn't keep the session secret as requested and that causes problems.

The two little twin boys Marcus and Jason are inseparable and plot to protect their alcoholic mother from loosing custody of the boys. During the same period of time Marie has recovered from her encounter with the flooding from her vacation, but she has not come back to her level of performance on French TV to take back her old job. Her mind continues to reach to her near encounter with death.

As part of his hope for normalcy Lonegan takes up a cooking course in which he is paired with Melanie (a very effective and appealing Bryce Dallas Howard). As a warm romantic relationship is developed she probes deeper and deeper into his gift (or curse), and forces a dark confrontation.

The script blends Marie's compulsion as she writes a book with Lonegan heading to England to follow in the path of Charles Dickens and Marcus' search for a valid connection to his lost twin brother.