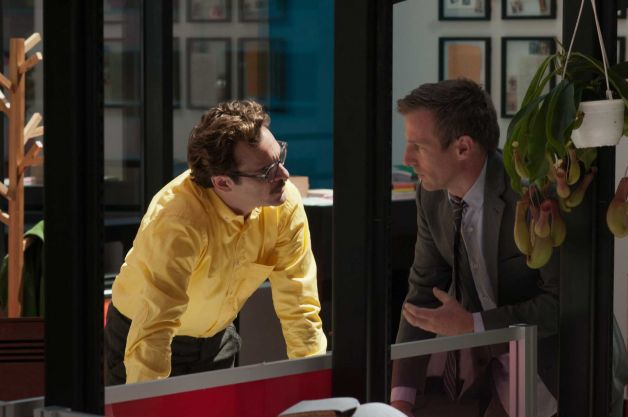 
A new film from Spike Jonze, his first since the intriguing, if problematic Where The Wild Things Are, takes on the importance of the need to be loved in a rapidly changing technologically savvy world and the change that is brought on by the lack of real human contact.

His slender, if prescient dramatic comedy Her stars Joaquim Phoenix and Scarlett Johansson and feels really offbeat and original (though not in its universal, holiday-oriented message) before finding its way into more conventional territory while staying attuned what could be happening now or right around the corner in Los Angeles where high rises and subways are all the rage.

The idiosyncratic filmmaker has delivered his first sole screenplay with a slight heartbreaking quality reminiscent of Eternal Sunshine of the Spotless Mind which maturely highlighted the investment not to wipe away what ended mostly in misery.

The contention here to offer a provocative idea revolving around the sensitive and lonely Theodore Twombly (Phoenix in an average Joe role evincing endearing candor) is the importance of being glued to one's personal electronic devices. In Theodore's case he's distanced attorney wife Catherine (Rooney Mara of Side Effects with very limited dialogue and in staccato flashbacks) to the point of divorce for example for being attracted to an amusingly crude life-size video game.

The mopey, adrift guy who is hip and nerdy with belt-less trousers was once an LA weekly writer seems to be an amiable fellow as he's paid to compose "handwritten letters" where the handwriting is computer-generated. This diverse Cyrano de Bergerac may be emotionally insufficient when it comes to dealing with women especially as a promising blind date with a beautiful, flirtatious lady (Olivia Wilde of Rush) demonstrates.

His regression leads him to a new A.I., an operating system which has the name Samantha (as deeply voiced by Johansson). Samantha, as it happens, has a yearning to become human. It is the kind of sophisticated contraption who can do more than handle Theodore's e-mails. She's growing emotionally in not only attending to his physical needs, but to getting his best-selling love letters published as a book.

Her has the ability to entertain on many levels for the more discerning audience even if the dramatic potential is limited by the one-sided nature of the relationship. What Samantha provides her possessor in her evolution is something that just can't be reciprocated. Skewing fantasy through a little science-fiction has its funny and affecting offshoots even if the wild distractions finally mute a diverting quirkiness augmented on the production side with the diverting designs and alluring soundtrack.

Samantha allows a wonderfully complicated Johansson perhaps to be liberated from her screen presence with tenderness and a little free-spiritedness not so unlike the sense of disconnect and alienation espoused in Lost In Translation (coincidentally directed by Jonze's ex-wife Sofia Coppola).

This tenuous, if vibrant two-handler gives an always engaging Phoenix (ferocious at times in The Master) quite a trajectory. Especially when Samantha delegates a fantasy for Theodore and a human surrogate Isabella (Portia Doubleday)in a marvelous interlude. In being relevant for its time where games have more nuance based the interaction of users, it's Amy Adams's "Amy" as a best friend and erstwhile paramour to point the bespectacled, mustached Theodore and the many more like him than would care to admit in the right direction.