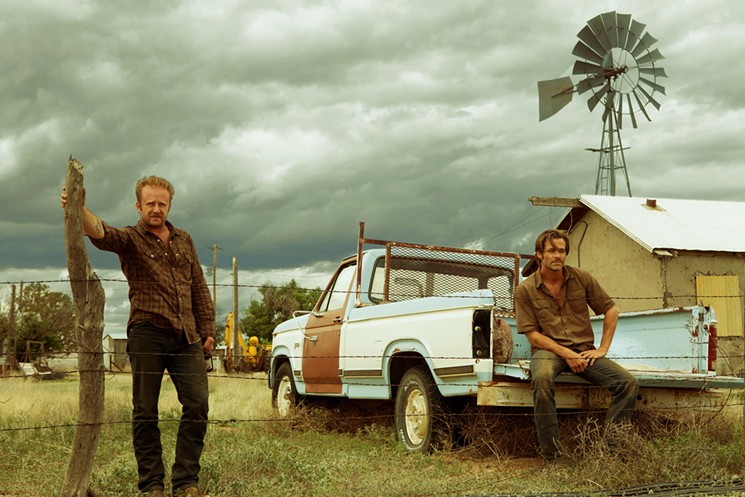 
Gritty net-western cops-and-robbers drama from Scotland's David MacKenzie (Hallem Foe, Starred Up) shot in New Mexican communities and set in a sun-dappled West Texas benefits from the canny scenarist former Sons of Anarchy actor Taylor Sheridan (writer of the gripping Sicario) that would be even be approved by the estimably meticulous Cormac McCarthy. Even if its darker elements elicit a gratuitous inhumanity at times a sensible sincerity in approach and delivery proves a mitigating factor.

Hell or High Water revolves around a crime spree set in motion by two disparate brothers - level-headed divorced with a couple of kids Toby (Chris Pine) and more unstable and not so keen Tanner (Ben Foster). The divided siblings join forces when a bank threatens foreclosure on a home with a mortgage and property left to Toby from his deceased mother that turns out to have black gold on it.

Peter Berg and Sidney Kimmel are half of the producing partners on a venture which has some fun tweaking with genre conventions (as well as the socio-economic) with nice off-shoots of wit and gravitas, especially as the action intensifies. In an early sequence the heisters aren't so sharp when dealing with a teller who doesn't have access to a safe code. It uses some acerbic snarky when it comes to details as a cat-and-mouse situation unfolds. For example, after Toby leaves a diner waitress a generous gratuity the dynamic unfolds with intermittent, if explosive alacrity.

A racially insensitive Texas Ranger with a slow Southern drawl, Marcus, is finely etched by Jeff Bridges, in contrast to his True Grit Marshall 'Rooster' Cogburn character. Toothpick-chewing Marcus seems to pick up on when things are about to happen before they do, and the wryly grizzled veteran (close to a mandatory retirement) is determined to smoke out the perpetrators. Having half-Comanche Alberto (Gil Birmingham, known from the Twilight franchise) as his deputy sidekick offers some amusing, even telling moments. Their relationship is akin to the Toby/Tanner dynamic with a taut showdown as the postscript is cleverly dovetailed into the denouement.

Pine, currently back as Capt. Kirk in a nostalgic if bittersweet Star Trek Beyond, excels in a role that is more empathetic than expected even with a frenetic, if sensitive Foster ignited by weaponry after co-starring earlier this year in The Finest Hours. The wiles and aptitude of Sheridan and MacKenzie having an eclectic guitar-based score and striking widescreen lensing by oft-collaborator Giles Nuttgens to accentuate the locations as characters and story matter most come Hell or High Water.