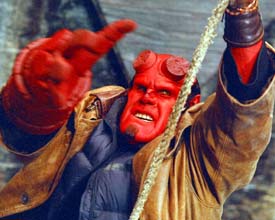 The visual artistry of Guillermo del Toro (Blade II, The Devil’s Backbone) is undeniably present in Hellboy, based on the Dark Horse comic book series by Mike Mignola. The director-writer has a strong veteran presence in Ron Perlman whose titular character has an imposing, yet wry streak.

Initially, some may find parallels to some of the origins of the “X-Men” comics. In 1944 during WW II in a remote area of Scotland, American troops stumble upon a Nazi ritual complying with Hitler’s plan for domination. A Russian monk named Rasputin (Karel Roden) thought to be long dead presides over the ceremony where the intended gateway of darkness is shut off and the eerily ethereal man is sucked into its vortex.

What remains from the swift, fatal conflict is an infantile red demon delivered into a soldier’s arms with the help of Baby Ruth candy. The director then smoothly cuts to the present where that baby now works for the FBI as a crime fighter called Hellboy.

The inspiration of its source and the ominous Nazis works to the film’s advantage. The script uses two characters following in the magic Rasputin started to open up the Gateway again. Rasputin’s Nazi amour is Ilsa (Biddy Hodson) and a second soldier is Kroenen, in a freakish reincarnation. The action is slam-bang with Hellboy hitting walls and glass panes regularly. More fun is had with the recreation of a satanic monster with extensive tendrils and the ability to have its soul appear in hidden eggs and thus hounding our cigar-chomping hero.

Make-up maestro Rick Baker does realistic work on Perlman (two knobs on his forehead) whose extensively-covered Hellboy enjoys cookies and milk on a rooftop, as well as beer and those Baby Ruth bars which act as a calming influence. He watches over cats and protects baby kittens while battling an ugly creature with tentacles. Selma Blair (Legally Blonde) is Liz Sherman, feeling remorse over the deaths she’s caused as a result of her pyrotechnic powers. And Perlman plays well off her in a strangely affecting romantic relationship while Liz is under psychiatric care. The amphibious “Men-Man” Abe Sapien is an emphatic, telekinetic force for Hellboy and John Hurt as support for the huge pariah as Dr. Bloom who nurtures him in his secret Bureau for the paranormal.

Del Toro has more control here than in Blade II, and has made what sometimes feels like a gussied-up 70's Marvel Comic with Perlman relishing this intense, blue-collar super-hero. It has the potential and enough of a human element for a franchise, but its fanatics are going to have to do much more than readers of Stan Lee to provide a gateway to a sequel of an odd union of a fireproof hulk and his fire-starting lady.