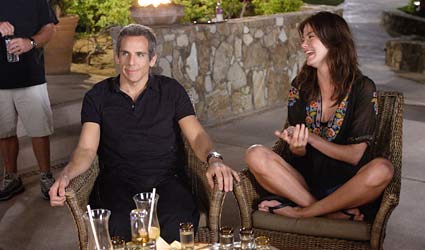 
Ben Stiller stars in this Farrelly Brother's remake of the 1972 Elaine May comedy which starred Charles Grodin and Cybill Shephard.

There're off to Cabo on a honeymoon when Eddie discovers the real Lila, and realizes he made a big mistake by marrying her. She's sloppy, eats like a pig and may just have too much sexual experience for Eddie's liking.

Lila holes up in the couple's hotel room with a bad case of sunburn, which leaves Eddie time to find and fall for the girl of his dreams, beautiful Miranda (Michelle Monaghan).

It wouldn't be a Farrelly Brothers film without a generous sprinkling of sex gags and ooze from bodily cavities, so if that's your liking, you won't be disappointed.

Ben is funny as the harried Eddie, but the film misses the mark by sometimes being overly mean, and staying with a gag, long after it stops being amusing.