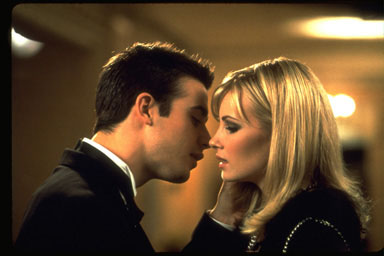 The start of the new year once again brings out the fluff films.  Head Over Heels is a classic example of just that.  Aimed at what can only be the teen / adolescent girl market, Freddie Prinze Jr. stars along with Monica Potter.

In what can only be a horrible attempt to make a comedy out of the classic Rear Window,  Head Over Heels revolves around Amanda Pierce (Monica Potter) meeting Jim Wilson (Freddie Prinze Jr.) and then witnessing him "murder" a woman in his apartment while ogling him from her own apartment.  This apartment is shared with four models played by models.  You will meet Jade (Shalom Harlow), Candi (Sarah O'Hare), Holly (Tomiko Fraser) and Roxana (Ivana Milicevic) as the models and absolutely the best characters in the entire story.  Who would have ever thought that models playing models could be so right for the part.

While there are two scenes, both involving bathroom humor and the models, that are very good, Prinze and Potter do little to help this film along.  Prinze appears to be a mannequin at times as he is there only for his looks and Potter appears to have a hard time showing other than a "deer in the headlights" look.