The Haunting in Connecticut 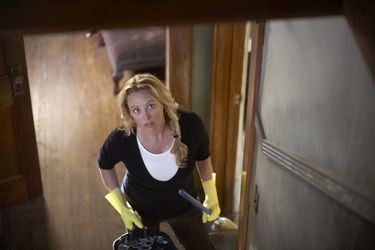 
This horror film, directed by Peter Cornwell is based on a true story about a family that was terrorize in an old Connecticut house in 1987.

The Campbell family leave dad (Martin Donovan) behind to work and Mom (Virginia Madsen), their young son and daughter, a nice and a teen son (Kyle Galiner) with terminal cancer, move to a rental in order to be closer to the hospital where the boy is undergoing cancer treatments.

Money is scarce and even though the house is dirty and run down, they're happy to have found it because of the cheap rent. However, they soon find out why its such a deal!

Doors slam shut, lights go on and off by themselves, and spirits in varying degrees of deterioration roam the hallways. The boy is the only one who sees the spirits and grisly images, but he thinks they might be the result of the experimental drugs he's taking.

There's the usual scary scenes that show up in most thrillers. Ghosts that appear in mirrors that disappear when the character turns around, dead, decaying bodies that lurk in the background and nightmares that don't end even when the person wakes up, are used over and over again.

There are also plenty of those scenes where you want to yell at the screen. "Don't hide in that dumbwaiter" or "Get out of that dark basement, are you crazy?" are a couple that come to mind.

However, even though the images aren't new, the fact there are young kids at risk including a sick, vulnerable teen which Gallner does a really good job convincing us of, adds a heightened scare factor to what would have been a run-of-the-mill thriller.