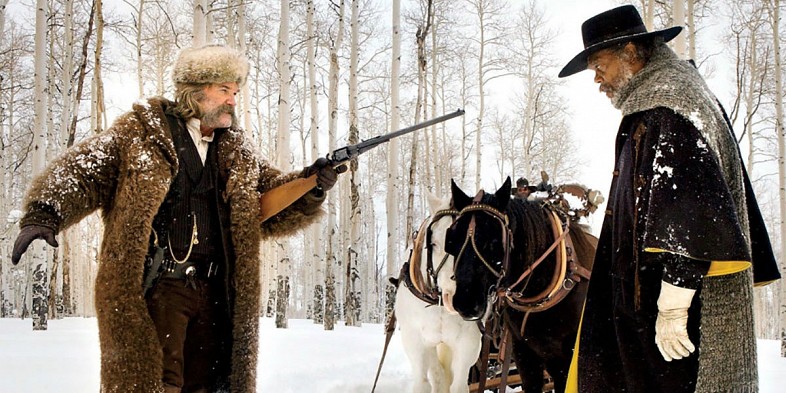 
A 70 mm widescreen, "Roadshow" experience is to be had before going digital nationwide at the start of 2016 for Quentin Tarantino's indulgent The Hateful Eight, a mostly confined Reconstruction-set Western that falls short of his recent fantasy genre recreations. Not in the florid conversation department or gradual sanguine vengeance and betrayal for what at least has an intermission and an overture with the venerable 87-year-old Ennio Morricone providing a surreal sublime score.

Not to say (in another Xmas present to his biggest aficionados) he hasn't assembled a decent cast in his not so ambitious or original 'Cinerama' blast from the past (of course with his chapters and flash-backing, curvaceous plotting intact) in what is a dash of John Ford and a larger dash of Agatha Christie with gorgeous opening lensing from Robert Richardson of a mountainous Wyoming. It's rumored the middle-aged wunderkind may turn his attention to the small-screen after a couple more feature films as he revisits issues that still resonate today like racism.

Kurt Russell (from the 'Death Proof' section of Tarantino's Grindhouse) has fun with the role of imposing bounty hunter John Ruth (known as "The Hangman") during a blinding snowstorm trying to take Jennifer Jason Leigh's loathed, later sadistic and quite roughed up Daisy Domergue to the town of Red Rock.

Along the way they come upon Maj. Marquis Warren (a hirsute Samuel L. Jackson, having a juicier role than in Tarantino's Django Unchained where the "N" word was also often heard) and "Sheriff" Chris Mannix (a finely guileful Walton Goggins of the recent departed small-screen Justified). A reluctant Ruth decides to have the hardly amicable North/South folks ride along with (their driver as well as) a brewing acrimony to Minnie's Haberdashery in his stagecoach.

Minnie happens to be with family so dwelling there are some obstinate profane people like Demian Bichir's Latino "employee", Michael Madsen's author, Tim Roth's migratory hangman, and Bruce Dern's Confederate general who apparently has a past with the Union Maj. Warren. Turning the screws on the conflict and the story itself the issue of trust becomes a driving force especially after some coffee is poisoned with Tarantino likely reference his own past (especially his debut Reservoir Dogs) as well as his genre favorites.

Does the protracted tale justify its epic running-time? Well, maybe in its subtle, taut simmering of brutality to let the characters espouse their contemptible wiles, but in essence the narrative and formatting would have benefitted from being shored up. Even if the close-ups and elements of many a frame have a visceral, viable quality about them to make certain interactions that much more explosive.

Jackson, and especially Leigh (mostly relegated to supporting low-budgeted roles as in Greenberg or Margot at the Wedding) are most persuasive when it comes to the the fiendish desperation sans the best of the auteur's monologues. But, this time Tarantino's cleverness finally is more underwhelming (read: unexciting and too sprawling) than wryly dark and subversive. But, hopefully it will boost Leigh back into the limelight like it did at least awhile for Pam Grier after Jackie Brown.