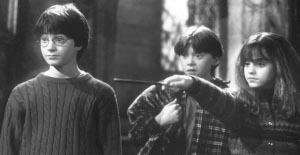 Harry Potter and the Sorcerer's Stone

Unless you've been living on another planet, you've heard of J.K. Rowling's phenomenally popular books about a young wizard name Harry Potter.  This film is based on the first book (there are seven planned for the series), and introduces young Potter as an orphaned baby left on the doorstep of his English aunt and uncle.

He's raised like Cinderella, forced to sleep in a cubby hole beneath the staircase and wait on his lazy relatives.  The bespeckled boy (Daniel Radcliffe) is resigned to his lot in life, until an owl delivers an unexpected invitation to attend the Hogwarts School of Witchcraft and Wizardry.

Hagrid (Robbie Coltrane - From Hell, Nuns on the Run), a giant of a man with a long beard and matted hair, is Harry's escort.  They go shopping for things he'll need at school, including a magic wand.  Behind a brick wall, an old fashioned cobblestone street appears with quaint shops on either side.  He gathers up his purchases and heads for Platform #9 3/4 at Kings Cross Station to start his new adventure.

After a train and boat ride, Harry finally gets to see Hogwarts, perched on a rocky cliff surrounded by water; it resembles a medieval castle.  The scene with the new students arriving by several little boats with the moon backlighting the majestic building, is quite a sight.

Harry's friends at school are Hermione Granger (Emma Watson), a bushy haired little girl who's bossy and studious, and Ron Weasley (Rupert Grint), an impish redhead who's a whiz at chess.

The three study potions, spells, magic tricks and get in trouble frequently, as the school is a veritable treasure trove of things to discover, like towers, moving staircases and dungeons filled with creepy surprises, all surrounded by a black forest that's home to a blood sucking evil creature.  Sounds like fun!

Rounding out the cast is a British who's who list; Alan Rickman is a dour potions professor, Maggie Smith is the headmistress of transfiguration, John Cleese is a ghost who haunts the halls of the school, and the talented Richard Harris plays Albus Dombledore, the Headmaster of Hogwarts.

Rowling has created a whole world for Potter.  There are "Muggles" (people who are not wizards), the Forbidden Forest, centaurs, unicorns, three headed dogs and flying broomsticks.  There's also a game called "Quidditch," a cross between field hockey, football and basketball.  But, what is great about the game is its players are on flying broomsticks that streak across the sky.

Directed by Chris Columbus (Mrs. Doubtfire, Home Alone) the two and a quarter hour film closely follows the book.  Although rated PG, there are quite a few scary moments scattered throughout, so little ones beware.

Harry Potter is a pretty terrific kid.  He's smart, resourceful and loyal - and since Warner Brothers is busy working on its sequel (Harry Potter and the Chamber of Secrets will be released next fall), you better get used to him.

The look of the movie is fantastic.  It's a treat for both the eyes and the imagination.