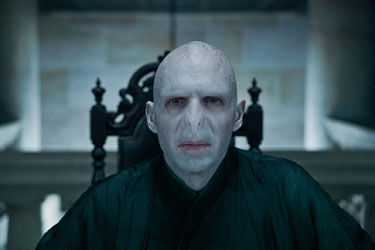 
It's down to the last two cinematic translations of J.K. Rowling's record-breaking novels which has emotions and action churning much to the pleasure of its legions of fans. It doesn't have the "distraction" of the attractive, in demand 3D format which it could have relied on.

Even if Harry Potter and the Deathly Hallows: Part 1 isn't really the most dazzling and dynamic in the series, it still has much going for it as an extraordinary sweeping event film. Expectations are definitely raised for a grand finale as the stage is set in what may be less magical this go-around even with well-mounted special effects, in addition to much craftsmanship in cinematography and production design.

From the Half-Blood Prince which tragically unfolded, Lord Voldemort (Ralph Fiennes) now has a stranglehold on Hogwarts and the Ministry of Magic. Thus, the fated, quickly maturing wizard in Harry (Daniel Radciffe) and friends Hermione (Emma Watson) and Ron (Rupert Grint) embrace a very risky mission - gathering the "receptacles in which a Dark wizard has hidden a part of his past for the purposes of attaining immortality" which Voldemort has hidden.

There are no sagely professors for the trio to look to for assistance, as they need one another more than ever being on the run from Voldemort and his wicked Death Eaters. Much responsibility and valor are needed as they are thrust into much startling uncertainty with much desperation suffused with grief and loss.

Scenarist Steve Kloves does his utmost to interweave the lugubriously unsteady narrative with interacting characters touched by violence in establishing a predominant unnerving atmosphere. Some political subtext is felt through what becomes of the media and the government by such a fearsome force.

Kloves and returning helmer David Yates mitigate the gradually grim trimmings with some levity allowing for characterizations, particularly in physical and symbolic rites of passage as the "Boy Who Lived" was predestined against the Dark Lord. So, what is harrowing in an elongated way has a nightmarish pressing anxiety to heighten the action and emotion when the wizardly world has become very precarious and perilous to say the least.

It's nice to see Radcliffe, Watson and Grint grow into roles they've had for nearly a decade with quite a varied and accomplished troupe of English thespians, including Maggie Smith, Alan Rickman, Timothy Spall, David Thewlis, Imelda Staunton, Helena Bonham Carter, John Hurt and Robbie Coltrane, to name several familiar from earlier episodes. They understate their roles opposite some newcomers in the form of Peter Mullan as an thuggish security officer, a bitterly disgraced fellow (Jason Isaacs) and Bill Nighy who is a fulsome politico. Rhys Ifans also has a more plot-driven role as a renegade reporter providing insight into the eponymous legend.

Alone and being chased, a finely understated Harry, Hermione and more complex Ron understand the immediacy of their odyssey to find and then how to eradicate these "horcruxes" previously aluded in the Half-Blood Prince. Although languorous and overwrought in stretches, this beginning of a suddenly finishing The Deathly Hallows adequately sets the stage for a grand concluding chapter as quite a showdown looms for an unusually powerful hero and his evil adversaries.