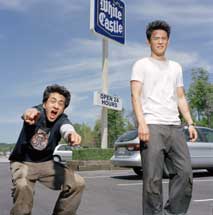 A craving for White Castle mini-burgers sets off one wild night for two roommates in Harold & Kumar Go To White Castle. Danny Leiner’s film fits into the stoner/buddy comedy mold, but subverts it high-mindedly by way of ethnic stereotypes.

Because of its deserved “R” rating that at least equals those of its ilk Porky’s and American Pie to name two, Harold & Kumar will lose some of the teenage male demographic, though they may tag along with their young adult friends. It might seem like a profane infomercial for White Castle, but the targeted audience could label it a modern comedy classic for the slacker/stoner crowd.

The raucous tone starts early when Harold comes home from work and sees Kumar doing some styling in front of the mirror in his room. A Friday night in front of the TV during some deep inhaling bears a cautionary ad- “Marijuana Kills”, but it’s an alluring one for those enticing little White Castle burgers that has this new Felix and Oscar traveling in the backwoods of New Jersey from New Brunswick eventually to Cherry Hill.

This multi-cultural variation on Road Trip and Bill & Ted’s Excellent Adventure is an unbelievable all-night quest that seems inane and pathological more often than not. But in trying to reach this Holy Grail, this mission often appears to be unattainable when it comes to having to deal with the likes of Freak show (Christopher Meloni), a tow-truck driver with boils on his face and crust in his ears. They’ll come into contact with a bigoted cops and “Extreme”bullies, as well as an escaped cheetah and a possibly rabid raccoon. The perceptions that Harold and Kumar make of themselves and each other during their twisted, simmering trek is what gives this case of the munches and endearing quirky sensibility.

Leiner, working from material close to the heart of scrip rewrite specialists John Hurwitz and Hayden Schlossberg, is comfortable with all the antics, combining some CGI with animation and puppetry. He gets a lot of mileage out of daydreams. And there are some good cameos, including Fred Willard (Anchorman) as a medical school recruiter, Anthony Anderson as a burger shack drive-thru attendant, and Ryan Reynolds (Van Wilder) as a desiring male nurse. The best one is by Neil Patrick Harris, never forgotten as “Doogie Howser M.D., doing a highly satirical, salacious version of himself on a mission for another kind of burger. He stains the proceedings in a way that is far better than when Harold and Kumar are trapped between two girls playing a noxious version of “Battleship.”

The title of Leiner’s popular, but annoying Dude, Where’s My Car is mentioned by Harold as the sight of those mouth-watering hamburgers appears to be fading fast. But, Cho as the mainly straight guy to Penn’s sharp-tongued sparkplug identify with the characters and each other. Whether form Korea or India, these post-adolescents aren’t afraid to roll with prejudice and greed and are able to stay real throughout all of the shady, bawdy nonsense. And, this potential summer sleeper may have the aroma for more success in Amsterdam.