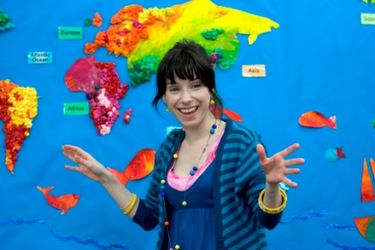 
Mike Leigh is a sure-handed, deft filmmaker as in Vera Drake and All or Nothing. Even when his storytelling may seem more threadbare in the oddly affecting Happy-Go-Lucky. The actor-savvy director is known for his liberal-mindedness when having his cast approach the material.

She's a grammar school instructor while dwelling with close gal pal Zoe (Zegerman) in the area of North London, maintaining quite a vivacious pulse, laced with humor. Being with a sourpuss driving teacher (Marsan, better than in Hancock), having therapy or learning the flamenco doesn't alter Poppy's demeanor.

Her ebullience makes her a winsome presence to a handsome social worker (Samuel Roukin), her employer (Sylvestra Le Touzel), and her sisters (Kate O'Flynn and Caroline Martin).

Leigh's antidote to despondency as in his memorably poignant Secrets and Lies lets the glibly silly Poppy etch out a characterization that is credible and not broadly rendered at all as may be indicated in the early going.

The scripting is like a series of vignettes that aren't always as telling and coherent as one may expect from the delicate, penetrating auteur. But, it becomes clear that Happy-Go-Lucky is character-driven, perhaps in a jokey kind of manner, even as Poppy has a peculiar encounter with a hobo (Stanley Townsend).

Leigh and Hawkins are firmly able to ground things in a slice-of-life reality and a perspective built around integrity. The viewer might perceive Poppy in a way that lets incidents accmulate to provocative, interpretative effect. The net result never aims to be like a sermon or espouse a certain belief in ham-fisted fashion, letting the social forces naturally play out. In fact, if the plotting is underwhelming, then the revelatory characterizations, especially the gifted Hawkins, make the sum of the minor-like parts a witty and bracing experience about being and acting as an adult.