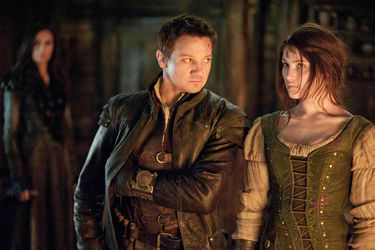 
In the past Hansel & Gretel were abandoned by their parents  in the woods and as the traditional tale goes they find a candy house which houses a Witch.   The Witch feeds them candy to fatten them up, but before they reach the right weight, the kids In a haunting scene kick her into the fire and that is the end of the first witch.

Years later the two are grown and make a living by hunting down witches that haunt various hamlets in the countryside.   The film is about a Witch Hunt and the opposition from  Sheriff Berringer (Peter Stormare).

The film is ugly and very dark in paces, particularly when the head witch Muriel (Famke Janssen) appears as an attractive woman then the dark cracked white face evil force searching for children to kidnap.   While the witches split folks in pieces we learn Witches can be killed by losing their head, in fire and when their heart is cut out.

Ben (Thomas Mann) is a young sort-of-reporter who wants to be a Witch Hunter who joins the brother and sister as they chase down the witches before an eclipse of the Moon arrives and creates a perfect storm for the Witches to kill a good witch and take over the little children.

Director, Tommy Wirkola never passes up an opportunity to use special effects for killing, capturing, burning and otherwise challenging the two heroes.   He also introduces Edward, a Troll with a large head and great strength played by Derek Mears and voiced by Robin Atkins Downes.  Edward finds Gretel impressive and turns away from the Witches to help the good guys.

The film is a sadistic dark trip filled with slaughter often caused by Hansel & Gretel who sport guns that could successfully overthrow the government of a small country.   Joanna Kulig is the one bright spot she plays the beautiful Good Witch with red hair who is far more earthy than the Good Witch from OZ.

Hansel part way through the search warns "don't eat the candy" referring to the candy house of the Witch.   He should have warned all of us to keep away from this Witch Hunt before we are caught watching a disappointing droll limited unpleasant FX film.