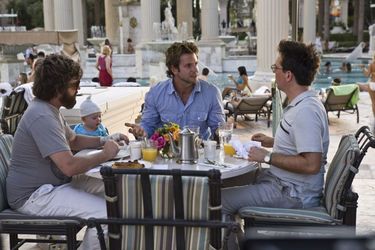 
The Hangover is about three groomsmen trying to figure out what happened during their pre-wedding bachelor party Las Vegas weekend. Todd Phillips's rebound from School for Scoundrels is vulgar on many levels, but it turns out to be outrageous fun almost in a "Three Stooges" sort of way.

Starring Bradley Cooper (He's Just Not That Into You), Ed Helms (from hit TV show "The Office"), and a surprising Zach Galifianakis (Into the Wild), Phil, Stu, and the hirsute Alan are clueless of the hedonistic happenings of the previous night.

Ending up in a ransacked first-class room in Caesar's Palace, the trashed trio have the company of a big tiger, chickens, and a wailing baby in a closet. One of Stu's front teeth is missing, Phil has a hospital bracelet around his wrist and their friend, Doug Billings (Justin Bartha), whom they've toasted with piercing debauchery, is nowhere in sight. And, a claim ticket given to the hotel valet has a police car on the scene conveniently awaiting them.

Scenarists Jon Lucas and Scott Moore mine the stupor-induced premise in excess and pervasiveness with flexibility. And, Phillips arguably does as well if not better with his spry cast, especially a giddy Galifianakis, to stage the comedy with more verve and panache than his Old School or Road Trip.

If you don't get everything during this twisted escapade that gets the most out of its R-rating, there's explicit backup during the end credits. Look for the little-seen of late Heather Graham as a sweet stripper who becomes significant, perhaps, to Stu and a wild Ken Jeong (Pineapple Express) as the relentless Mr. Chow. And, Mike Tyson, who opened up with vivid self-deprecation in his self-titled documentary by James Toback (and is enduring a personal tragedy), has a knock-out of a cameo as himself doing his rendition of Phil Collins' "In The Air Tonight".

This fearless, untamed crass caper doesn't have the star power of last year's What Happens in Vegas, but, armed to be a summer sleeper, this well-crafted raucous blowout takes full advantage of the headaches that occur when splurging in Sin City. It even has a resolution that is more reasonable than the crazed happenings preceding it would suggest.