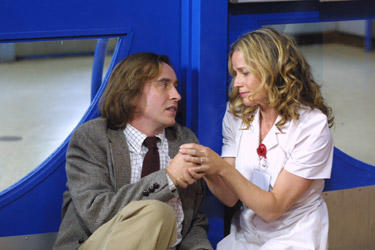 Here, in Andrew Fleming's not such a saucy farce, Coogan is seen (in flashback) first in amusing bits where his Dana Marschz (not really a tongue twister) as a floundering commercials thespian.

Now, he's a beguiled drama teacher at West Mesa High School in Tuscon where the review of his "Erin Brockovich" by a junior-high looking critic (Shea Pepe) is pointedly down. It doesn't say much for him as well as his only "bright" students, closeted gay Rand (Skylar Astin) and Christian convert Epiphany (Phoebe Strole).

So, with budget cuts looming over the drama program and more incoming students in a school with asbestos issues, Marschz finds something authentic by visualizing Shakespeare's Hamlet with a Latino spark. The screenplay by Andrew Fleming (remembered for the presidential parody Dick) and Pam Brady sets up many gags with line readings off of contemporary stereotypes.

The thuggish group has a presence in the unfriendly Haywood (Joseph Julian Soria) who is ideally cast in the title role. This hair-raising sequel finds a way to change the original tragic outcome with no asides. There'll also be moments for the likes of Albert Einstein and Hillary Clinton, as well as Marschz taking on the role of Jesus Christ. With a gay men's chorus, he'll moonwalk in the outlandish "Rock Me Sexy Jesus".

Hamlet 2 unfolds with some provincial panache as in limited, yet appeal of say a Happy, Texas with some spry distastefulness, considering the denizens, the school principal (Marshall Bell), and a eager law beaver (Amy Poehler of Baby Mama).

Coogan, of late as a rabid, addled director in Tropic Thunder, probably overstays his starring welcome in a way to salvage his career and marriage. Catherine Keener delivers pungent zingers as Marschz's wife recalling her bad-tempered turn in Your Friends and Neighbors. David Arquette has little time to bring anything to the Marschz's boarder, and Elisabeth Shue doing herself having become a Tuscon nurse isn't something with much comedic payoff for the viewer.

As late summer fare goes, the inadvertent "inside" humor has something going for it, along with a slick technical package, even if the Bard would want Coogan and his game cast to offer more snappy soliloquies.