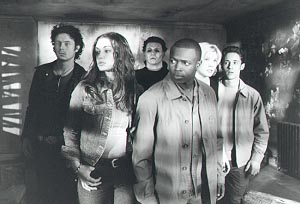 Three years have past since we last saw Michael Myers, the masked, knife-wielding slasher.

As the films opens his sister Laurie (Jamie Leigh Curtis in a cameo appearance) is in a psychiatric hospital for attempting to kill her evil brother and mistakenly hurting someone else.  There's no getting rid of the guy.

This time around, zombie-like Michael goes hi-tech.  An innovative producer (Busta Rhymnes) comes up with the idea of having six college students spend Halloween night in the house that Myers grew up in, the site of his first murder, and broadcast the evening on the Net.

The teens are asked to dig through the ruins of the old house which has been boarded up for years, looking for clues as to why Myers turned out to be a vicious killer.

The producer of the show, hoping to spice things up a bit, booby traps the house with movie props, but before you know it, surprise, surprise, Myers shows up to either decapitate or otherwise mutilate the kids one by one.  And although the kitchen is outfitted with a number of big, sharp knives, none of them arm themselves before rummaging through dark cobwebbed closets and cellars; of course there's no electricity.

Byan Merriman plays a student who has an on-line relationship with one of the girls in the house, (Blanca Kajlich).  While at a house party across town, he watches the show and tries to help his friend.  At last, someone uses their head to outsmart the walking menace.

I give the writer credit for attempting to bring the slasher into the 21st century.  At least they came up with a new gimmick for putting young people in danger.