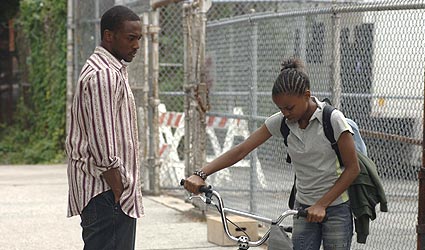 
This unhurried independent feature directed by newcomer Ryan Fleck is a difficult, thought-provoking experience set in an urban school environment.

Half Nelson doesn't have wrestling on its mind, though the performance of lead actor Ryan Gosling has an undeniable hold on the intrepretative, alert viewer.

A female student, 13-year-old Drey (Shareeka Epps), finds her instructor in a sad state in a girl's restroom after school one day. Fleck's assured helming lets Dan and Drey act as a life preserver for one another.

The adversity of the precocious, street-wise, soft-spoken Drey is evident with a kind, but uninvolved mother in her life. There's no father in her life and the brother she likes is in prison. The unctuous drug dealer, Frankie (Anthony Mackie of She Hate Me), who gave him the taste of danger now eyes Drey as a new runner for the business.

Half Nelson lets the daze of drug addiction and shattered idealism settle in as Dan finds necessity in sheltering Drey. Fleck lets it all unfold in a series of observations that puts to good use the conversational technique a naive Dan employs for his students to look at themselves and the big picture with enhanced clarity.

Despite the harsh urban, societal pressures with no simple resolutions that ensnare Dan and Drey, there is something positive in the end about their uneasy bonding. With compelling portraits by the underrated Gosling and a very bright Epps (captivating like Keke Palmer in Akeelah and the Bee), this intelligent drama really habituates for humanity.