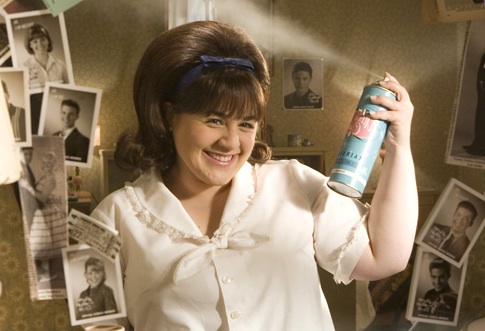 
Hairspray brings us back to the spotless white steps in Baltimore to visit a teen dance party show, big hair, heartthrobs and hefty girls.

Recent musical releases have had mixed results - the first group Rent and The Phantom of the Opera fell flat, the second group made up of Dream Girls and Chicago did well and received awards; Chicago winning it all. Hairspray fits in the second group - it's a top ten film.

Exciting and filled with fun it's the story of Nikki Blonsky's Tracy Turnblad, an irrepressible chubby teen who just doesn't allow her size to stand in the way of her dream to dance on the Corny Collins (James Marsden) dance show. We all know he's Dick Clark, just a little more hyper.

The script by Leslie Dixon brings the story right on target. It moves throughout but is not afraid to allow the film to look like a traditional musical. The transitions from dialogue to dance and voice flow without an edge or barrier, but not as flowing as in Chicago. But that's OK; this flow is just right for Hairspray.

While we tap our feet, cheer and smile throughout the two hour production some of the performances truly stand out. John Travolta's Edna is delightful to watch, she's everybody's grandmother who comes out to the street in the end after playing a secondary role most of her life. For those of us who have watched Travolta's full career, his Edna just doesn't fit his acting world, yet he lights up the screen in each of his scenes. And what about gorgeous Michelle Pfeiffer as tight lipped Velma von Tussle, the evil TV station manager with make up to age her and enhance her unbending personality.

Then there is Allison Janney's Prudy Pingleton who gets a laugh each time she displays her grief as her daughter Penny (Amanda Bynes) reaches out to break barriers on live TV with the help of Seaweed a smooth Elijah Kelly on Negro Day at the dance party.

But it's Blonsky's Tracy that has a crush on Link Larkin (Zac Efron) the singing dancing heart-throb of the Baltimore dance party. His black spit-curl places him just right, back in time. His smile has all the girls swooning and Tracy no matter how she looks expects to land him.

Director Adam Shankman, keeps the story revolving around the Turnblad family by dragging Edna outside for the first time in a decade (she was a size six the last time she went outside). Working at home doing ironing has kept her safe from those prying eyes and shaking heads reacting to her XXXL very large size. But in the end on Dance Party she must come-out and shows Baltimore how to dance just as her daughter Tracy gets to strut her stuff on TV.

We shouldn't forget dad (Christopher Walken), a joke shop owner who Pheiffer's Velma can not figure out. He even entertains with a musical number and dance. His very stable family helps Tracy ignore her short round stature while pretty blond slim Amber von Tussle (Brittany Snow) struggles even as a three year winner of the big contest. While Queen Latifah's Motormouth Maybelle is more ordinary than usual she is a force in the changing TV air.

I suspect a comparison to the Ricki Lake twenty year ago performance with Divine as Edna is necessary but fairly simple, even with the same characters, in this script the characters appear moral, real, and less over-the-top and ridiculous. This one is less glaring, more enjoyable and in fact it could have us dancing in the streets...well probably in the aisles.