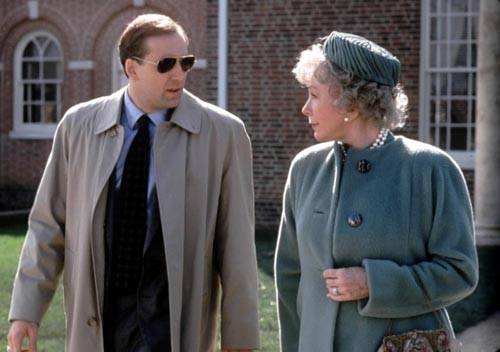 The film begins at the end of Douglas' three year stint at Tess' home. He says goodbye to his coworkers and hops on a plane to Washington, eager to become an active agent again. Tess calls the President and requests that Douglas be sent back to guard her so he sheepishly returns to the job he detests.

Douglas and Tess have a love/hate relationship, each one seeing how far they can push the patience of the other. She refuses to follow safety procedures and he shrugs off her petty demands.

As the film progresses, Douglas and Tess warm up to one another and eventually have a close mother/son relationship.

Tess is a dignified lady living out her life in quiet seclusion. She spends tie in her upstairs bedroom, clipping newspaper articles, watching old videos of her beloved husband and taking her meals in solitude. A woman whose life was in the past. When she does venture out, it is for a spur-of-the-moment golf game in 30 degree weather or an opera outing with her entourage of Secret Servicemen in tow.

One of the funniest scenes revolves around the typical image of an agent, wearing dark glasses and ear wires connecting them to other agents, ready for action at the drop of a hat, following the elderly Tess as she grocery shops, using their walkie-talkies to check prices on cans of peas.

MacLaine is superb; she makes Tess a very real and sympathetic woman. Cage also does a wonderful job. His character starts out resenting Tess, but he's ready to do his job, no matter how unpleasant. He slowly changes his feelings as he gets to know more about the private Tess. It's a very believable transformation for both of them.

The film is wonderfully funny and unexpectedly warm. A real treat.