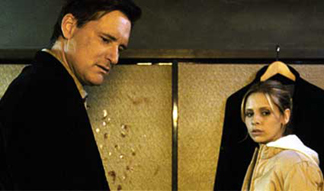 The Grudge, a remade Japanese feature film by the original film maker, is undeniably scary at times. But its high fright quotient comes from director Takashi Shimizu’s ability to manipulate frightening sounds and images (limited by the PG-13 rating I’m sure), and not because he gives us any real emotional connection with the characters.

The movie is set among Americans in Tokyo. Sarah Michelle Gellar stars as Karen, an exchange student who finds herself in what is essentially a haunted house, alone except for a catatonic woman, a screechy black cat, a hidden corpse or two and some very vivid ghosts. The audience will be rooting for Gellar to go into “Buffy” mode and kick some ghost butt, but this movie is seriously lacking in irony and even light humor. It turns out that violent past deeds, which we slowly learn about, have left a permanent curse on the house.

Shimizu is a skillful director, and he aptly changes without warning from one point to another in the story’s time line. Eventually, past and present are brought together in a climax that ties up loose ends and of course leaves an opening for a sequel.

Shock cutting is combined with a screeching soundtrack to provide us with undeniable jolts of adrenaline. Unfortunately, the movie’s ability to stimulate the autonomic nervous system is offset by its failure to engage the emotions, not to mention the mind.