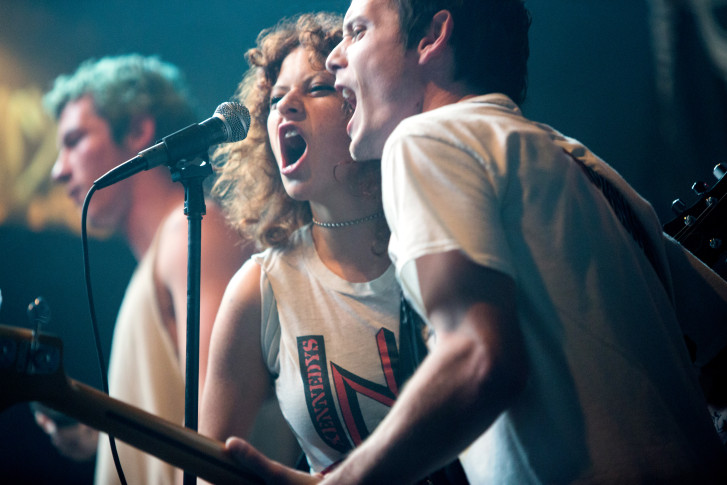 
Modishly mounted for a low-budgeter is Jeremy Saulnier's fairly suspenseful follow-up to the nuanced revenger Blue Ruin which will mostly appeal to the Midnight Madness crowd.

A kind of variant on Ten Little Indians and Assault on Precinct 13 is his formulaic fright fest Green Room set in the backwoods of Oregon focusing on the trouble a hardscrabble punk band (called The Ain't Rights) gets into after playing some rebellious rough-edged melodies on some covers at a Neo-Nazi skin bar.

The band (Anton Yelchin, Alia Shawkat, Joe Cole and Callum Turner) actually aren't in dire straits because of their musical selections, but because of inadvertently witnessing a terrible incident in the titular area. The bar's quietly menacing impresario Darcy (Patrick Stewart) and his underlings led by his manager (Macon Blair, Dwight from the aforementioned Blue Ruin) force them into an unnerving situation with the luridness prolonged a bit to heighten the tension.

But, the onslaught of violence is eminent in a dextrous Saulnier's tightly drawn action and screenplay, pretty much able to make the preponderance of each frame (especially in the barricaded area with a certain reckless desperation after snatching a weapon from kidnapped bouncer Big Justin) display enough flair to accentuate a desired slick, if finally hideous effect.

There isn't really the intention of character development here though Stewart obviously revels in the villainous change of pace. Yelchin evinces a sensitive charm as The Ain't Rights bassist leader, while Imogen Poots has a convincing American accent (along with Cole) while rising with empowered hysteria as a deeply distraught best friend.

To mitigate the increasing, expected gruesome goings-on Saulnier's vicious set-pieces are countered with amusing ones. Those that consider the recollections and interplay of group members and an oft-occurring joke about naming their favorite 'Desert Island Bands.'

The director works deftly with his craft contributors to indicate stylish verisimilitude within the genre from the soundtrack with a strong feel for the nature of musical form to design and lensing to propagate an intensely terrifying claustrophobia. This Room for certain uninitiated onlookers will not be green with envy over it given the rage and primal instincts which occur in the midst of the malevolent Darcy and Pat.