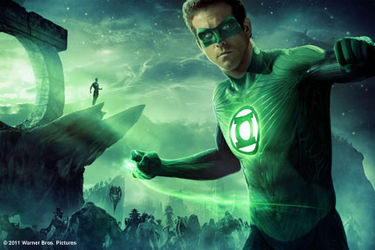 
Ryan Reynolds is handsome, buff and likable, so he's a good choice to play a super hero in this Martin Campbell directed film.

Based on the character that originated in the 1940s, Hal Jordan is a hot-dog test pilot who is chosen to take over the task of saving a far away planet when an alien crashes on earth.   With its dying breath, the creature urges Jordan (Reynolds) to put on his glowing green ring and take over the responsibility of being one of the Green Lantern Corps.

When Jordan places the ring on his finger, he reluctantly takes on the mission.   He's transformed from a cocky, smart-aleck into a green suited, flying hero.
One of the best scenes has Jordan visiting the planet of Oa, which is filled with strange CGI characters.   They give him a quick lesson in self defense to toughen him up, and soon he's off to defend his new acquaintances against the evil Parallax.

Instead of just one evil character to fight against,  the Green Lantern has two so-so forces to fend off.   Hector Hammond (played by an unrecognizable Peter Sarsgaard) is a nerdy professor who becomes a large-headed jealous nemesis when he is infected by an alien.   But, the main evil force that threatens the Lantern is Parallax.   Its a big mass that grows larger when in sucks in everyone in sight.   It resembles a swirling, black storm and the final showdown is pretty mild stuff and quite a letdown.

Reynolds doesn't seem to take himself seriously and has a carefree attitude, so he slips into the role easily. Hopefully a sequel showcase his super hero talents better by having a more worthy adversary.