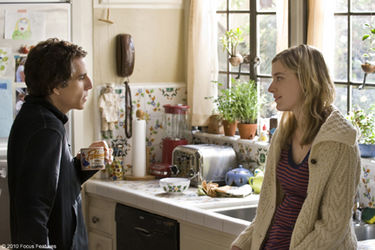 Here's a "small" specialty item that allows the sullen, titular Stiller to get by on a hangdog charm, understated enough so the neuroses aren't that irksome. You may have seen bits of this character from many of his movies roles, from Along Came Polly, Meet the Parents, Tropic Thunder, even ones in his oeuvre lesser recognized like The Royal Tenebaums, Permanent Midnight and Flirting With Disaster.

Lost professionally and emotionally, his 40-year-old Roger Greenberg has just been released from mental health care, as this New Yorker moves to Los Angeles to figure out his life.

While house-sitting for his brother (Chris Messina of Julie & Julia and Vicky Cristina Barcelona) he develops a relationship with his brother's assistant, a hired family helper and fledgling singer Florence (Gerwig). A formidable Florence is drawn to Roger's sensitivity as she fulfills more than his need to be driven around among stuff that plagues him like an ill pooch.

This cinematic Facebook of sorts allows the disaffected, melancholic Greenberg to become reacquainted with characters - a former bandmate (Ifans of Pirate Radio) and flame (Leigh).

This familiar, self-serving arc has the kind of pathos and wry moments that manage to work on a viewer's sympathy similar to the recent Crazy Heart which featured an authentic star turn by recent Oscar-winner Jeff Bridges. The pairing of Roger and Florence may seem unlikely with what the former is going through, maybe not unlike what Anne Hathaway's tumultuous Kym was in the resonant Rachel Getting Married.

Baumbach, maker of the surprising divorce drama The Squid and the Whale, and Leigh (a star of his Margot at the Wedding) often are able to instill a nervy pungent flair to the proceedings and foibles. But, even if an air of pretentiousness is a little weighted for some, one can find this indulgence of a midlife crisis with much originality, bolstered by a production that senses the importance of being on-location.