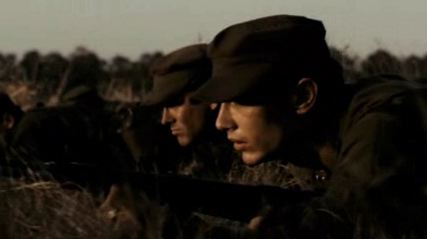 In January 1945 as World War II was winding down, more than 500 American prisoners of war were being held by the Japanese in the Cabanatuan Camp in the Philippines.

An American battalion headed by Lt. Col. Henry Mucci (Benjamin Bratt) and Captain Robert Priner (James Franco) have to travel through many miles of enemy territory to reach the P.O.W.s, and once they arriving carry out freeing the men many who are extremely injured.

Also on hand to help the American soldiers are a group of Filipino guerrilla fighters who resent the Japanese taking over their country. They volunteer to dismantle a vital bridge on the path to the Camp to keep additional nearby Japanese forces from helping their countrymen once the rescue begins.

The action is in three separate areas. The prison, the underground resistance located in Minilla, and the soldiers making their way to the P.O.W. camp.

The prisoners are beaten down and demoralized after spending three years in captivity. They've heard rumors that the war might end and they might be saved, but each one hates to allow that dream. Major Gibson (Joseph Fiennes), the ranking officer at the camp, is dying of malaria and his girlfriend, a nurse in the resistance, smuggles drugs to him to keep him and others alive.

This true story, directed by John Dahl, is both engrossing and moving. Bratt is the epitome of a 1940s star: tall, good-looking and serious. He makes a perfect hero. He also has the quiet authority of a young man sure of his mission. But, the emotion mostly comes from Fiennes as the dying Major. His sunken eyes and shaking body show the character of this man, who although quite sick himself, is always conscience of the morale and safety of his men.

This is a very good war drama that contains realistic battle scenes and gets its impact from old-fashioned good acting.