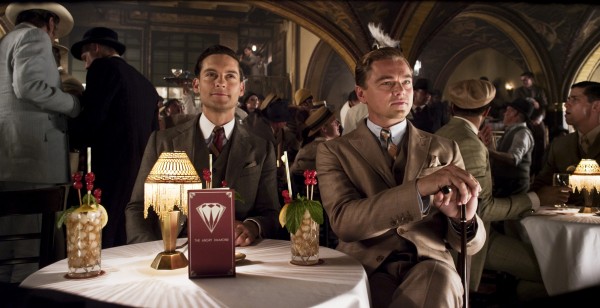 The story is told by Nick Carraway (Tobey Maguire) from a sanitarium where he's being treated for alcoholism and depression.   His doctor suggests he write his thoughts and memories in a journal as part of his therapy, and from there his vivid account of Jay Gatsby and his life unfolds.

Gatsby (Leonardo DiCaprio) lives in a magnificent mansion and although his lavish parties are legend, little is known about the mysterious character.   Nick's story begins a couple of years prior when he receives an invitation to one of those parties.   It was the roaring 20's and Gatsby lived life to its fullest.   He opened his doors to almost all of New York; people would arrive in their finest clothes, drink to excess, dance on top of pianos, jump into his pool fully clothed and sleep off their drunkenness until Gatsby's staff came to clean up in the morning.

None of the guests seem to know their host, and the rumors of his life run rampant.   When Gatsby finally appears on his balcony with fireworks exploding above his head at one of those parties, hardly anyone seems to notice the impeccably dressed, boyishly handsome man.

Gatsby seeks out Nick and asks him to invite his cousin Daisy Buchanan (Carey Mulligan) to his small cottage next door, so he can meet with her.   Nick agrees, and its a sweet meeting.   The two had been lovers years before, but when poor boy Jay goes off to war, rich-girl Daisy marries a wealthy bully by the name of Tom Buchanan (Joel Edgerton). The day of the tea, Jay is shy and tongue-tied and she's thrilled to see him and they take up where they left off without thinking of the consequences.  The two actors have plenty of charisma and really click as a couple.

DiCaprio slips into his character with ease, he's great in the role, and Mulligan is luminescent and vulnerable.

A lot has been made of rapper Jay Z's music being prominent in the film.   There's so much more going on - speak easies, fast cars, beautiful clothes, drinking, fighting, elaborate sets - every extravagance is present, so an eclectic sound track just seems to fit.

People seem to either love or hate some of Luhrmann's work, I think he's a perfect director to portray the excesses of the era.