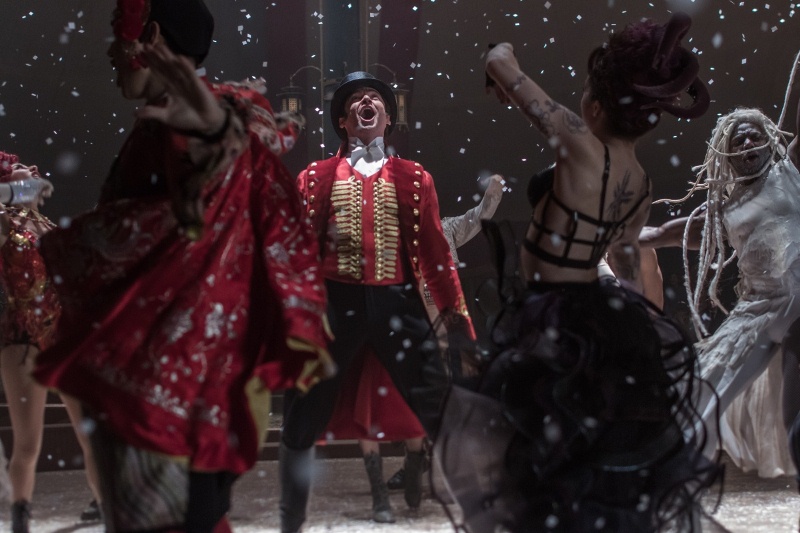 
Hugh Jackman brings the excitement, jubilation, hope and determination of Phineas T. Barnum to the screen in an over the top musical spectacular that fills the screen and the theater with music, special effects and a joyful cast of unusual characters who travel the road P.T. Barnum brought to America in the mid 1850s.

Jackman's wide smile draws us in, we even like him when he cheats to get ahead.  Beginning when Barnum is a young child (Ellis Rubin) on the streets attempting to steal vegetables from a vender after his father passes on, he is confronted by a deformed man who offers him an apple.  According to the script is the beginning of his concept of placing folks who are different on his stage.  One became the famous Tom Thumb (Sam Humphrey) another the bearded woman (Lettie Lutz - who has played Bloody Mary from South Pacific).  They are joined by the 500 pound man, the tallest man and two flying acrobatics one is played by Zendaya a beautiful young woman who draws the attention of partner Phillip Carlye (Zac Efron).  The troop is eventually invited to perform before Queen Victoria in England and President Lincoln.

Barnum's motivation is to prove he can succeed for his wife carefully played by Michelle Williams and his two daughters (Cameron Seely and Lettie Lutz) who are witness to his first illusionary performance a spinning container with holes and a light inside providing a light show on the walls which surround it, a little like the laser lights used on houses today for holidays.

Using phony collateral he borrows money and builds a wax museum which is not very successful but the side show attractions he brings in are very popular even when they face prejudice from up scale snobs and low life roughens.  Barnum is side tracked by Jenny Lind (Rebecca Ferguson) the Swedish Nightingale who he imports to the United States and tours with her until they have a falling out, it's a little like Citizen Kane but she could sing.  Following the ending of the Lind affair, his museum is destroyed by fire and he is back where he was with no ability to secure more funds.  That leads him to invent his tent show for which he is remember of him.

The Greatest Showman feels like a musical stage production and they are difficult to translate into film.  The dancing is stronger than the music but the entire package of performances are spectacular, probably way beyond what they were in Barnum's time.  They are non the less a package worth the visit, there is wonder and spectacular entertainment through out, the characters and script are impressive so are the elephants.