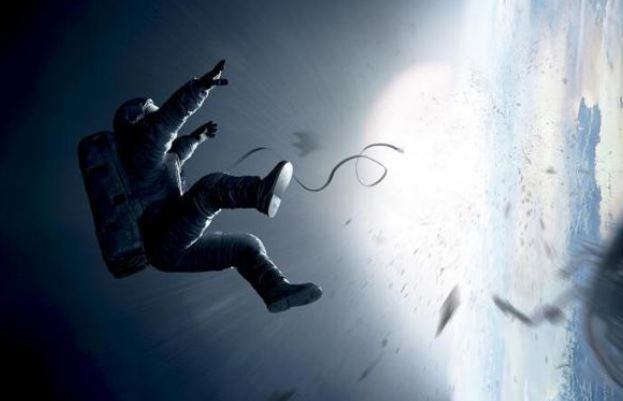 
An act of visual extravagance of the highest order with just enough on its mind is a uniquely memorable, taut sci-fi thriller mindful of evolution, not just on the cinematic scale. The scintillating trailers are just the tip of the iceberg set in the stillness of space using the best that special effects can offer (without that cheesy CGI look) to provide the view an opportunity to seemingly step into what appears to be shot on location and optimally experienced in the IMAX 3D format scheme.

Gravity stars Sandra Bullock and George Clooney (and even an unseen Ed Harris from Mission Control) under the visionary direction of Mexico's Alfonso Cuaron (who co-produced, co-wrote and co-edited) who may be staying in fearful and desperate survival terrain considering his last stylish sci-fi excursion nearly seven years ago starring Clive Owen, Children of Men. His latest virtuoso contains some extended takes, including an opening 17-minute doozy that will have many onlookers in awe in its swiveling and altitude movements. He works like a masterful conductor especially in union with his brilliant lensers, Emmanuel Lubezki (The Tree of Life) and Michael Seresin.

A race-against-time scenario (maybe calling to mind Apollo 13 and not for example in a 2027 dystopian world resting on the fate of humankind) reaches veteran astronaut Matt Kowalski (Clooney of The Descendants and The Ides of March) and tethered rookie scientist Ryan Stone (Bullock of The Heat) orbiting Earth providing technical support on the Hubble telescope. The storyline devised by Cuaron and his brother involves a series of contrasts once a torrent of debris renders their space shuttle obsolete from a Russian targeting of one of their satellites.

Oxygen obviously is in short supply and the chance to get back to a massive-looking orb bathed in green, blue and tan hues will require going farther out into a weightless void. The coiling conflict works around a variety of exchanges between Ryan and Matt with each reaching out to one another while nearing a Russian space station and  a Chinese spacecraft as a rescue plan would seem to be in the works. Even though communication appears to be very faint at best after Kowalski boasting about surpassing a spacewalking feat.

The audio and visual components relay aplenty especially in the stillness of space in part through Mark Price's eerie electronic, acoustic riffs and Ryan's heavy breathing inside her helmet with echoes of Alien when she is tumbling in her T-shirt. Clooney offers some levity and Matt is the right guy to have on your side when disaster appears imminent. Bullock is vulnerable (especially through a personal crisis of faith) and mercurial in ways that provide dramatic strides for the Oscar-winning actress (The Blind Side).

This stripped-down, wondrous space odyssey concludes in smooth fashion, not really that philosophical in its insinuations but knowing how to ratchet things up against a menace that rarely is experienced and depicted so convincingly and astonishingly here. Essentially this is a tenuous two-handler that never loses its ability to provide jolts and surprises with a charming Clooney giving an unglamorous authentic Bullock the right of way to engage a discomfiting disequilibrium. Although the coda may be less resonant than disorienting,   Gravity with an empowered embodiment always operates with an extraordinary reconnaissance and clarity into the heart of a darkness more vast than any ocean.