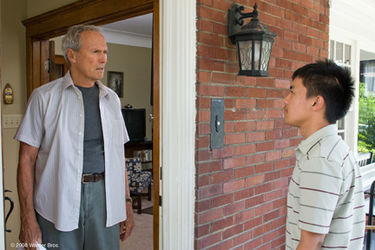 
Clint Eastwood's first acting role since the poignant Million Dollar Baby shows that the septuagenarian filmmaker can still succeed at what he's been doing for 53 years.

Gran Torino is a bracing portrait of humor and melodrama as helmed by the icon who dominates it as jaded Korean War vet Walt.

His persnickety ways in his longtime Detroit-area home are challenged by the neighboring Far East (Hmong) groups that seem to live on top of one another. Walt seems to have the mentality of a fully-loaded Archie Bunker or an aging, still invincible Dirty Harry.

His hard-boiled exterior has him nearly coming to blows with the next-door family. There he confronts the outspoken daughter Sue (Ahney Her) and her reticient brother Thao (Bee Vang), who was pressured by a local thugs into trying to snatch Walt's cherished 1972 Gran Torino. A little akin to the aforementioned Million Dollar Baby, Walt gradually decides to make Thao as his charge, as a little wisdom can go a long way.

The notion of cultural holism takes hold in a deliberate, natural, and refined way as presented in a dampered down, adroit way by Eastwood who brings a bitter steadfastness to Walt. Walt's consistent acrid discourse is something he's accrued from his life's experiences, but doesn't intend to be as hurtful as some may think it is in the context of today's world while durrounded by the conflict of communities trying to cope with one another under literal and figuratively cramped conditions.

Nick Schenk's sensibly thrifty scripting coalesces with the spare approach to get through the bigotry, loathing, and violence to reach an understanding of humanity. Walt's driven nature tests the socio-economic waters around him, coming to terms with inner prejudices and flaws. No one is too old to open up to a changing, complex world, even to a gruff, gravelly-voiced fellow like Walt.

Gran Torino is hardly over-produced, swirling away from a thriller molded out of Death Wish or Eastwood's Inspector Harry Callahan's pictures to something built for survival in a multi-cultural environment. If the supporting roles just don't have the spark of Eastwood's more recent, ambitious endeavors, then this sometimes snarky, touching examination of human interaction is sometimes levitated by John Carroll Lynch as a sharp-tongued barber and Christopher Carley as a boyish parish priest.