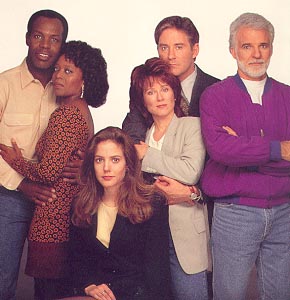 Director Lawrence Kasdan has assembled an excellent cast, directed them well and molded the script into one of the best films of the year.

Mack (Kevin Kline) and his wife Clair (Mary McDonnell) live well in Los Angeles.  He is an immigration lawyer, their son Roberto (Jeremy Sisto) is nearing adulthood and his independence concerns Clair.  They are a comfortable upper middle class family.  In order to avoid traffic following a Lakers' game Mack travels a new route home which leads him into a less affluent section of the city.  His new luxury foreign car suddenly breaks down and he is stranded in an unfamiliar dangerous neighborhood.  The driver of the tow truck he calls for help in Simon (Danny Glover). Simon saves Mack from a car full of gang members who are about to attack Mack.  Mack is determine to fulfill the obligation he feels to Simon.

Simon's family is far less comfortable.  His nephew Otis (Patrick Malone) is a gang member and his nephew's family lives in danger of drive-by shootings.  The meeting of Simon and Mack changes both lives.

Kasdan handles the script skillfully.  Just when it appears the film will get out of hand and become seriously violent, he extracts the characters by moving into a dream sequence or a line by Davis (Steve Martin), "A good movie can solve all our problems."

Over all, Kasdan's work forces us to think about what we now find commonplace in society: kids killing each other, people living in boxes and limited education which kills the future.  Los Angeles is upside down in Claire's mind.  Given all the background problems, the film is about people and how life can be rich with a little bit of luck.  Mack's interference in Simon's life turns out very well.  He has a blind date with Jane (Alfre Woodard) and it becomes a positive, lasting relationship; his sister is given a chance to move to a better place.  It is as though something magic is moving each of the character's lives.

Grand Canyon explores the minor role played by humans in the vast tapestry of time.  It also reaffirms the majesty of life, not by preaching, but by following thirteen lives that prove life is worth living.  Don't miss this one.