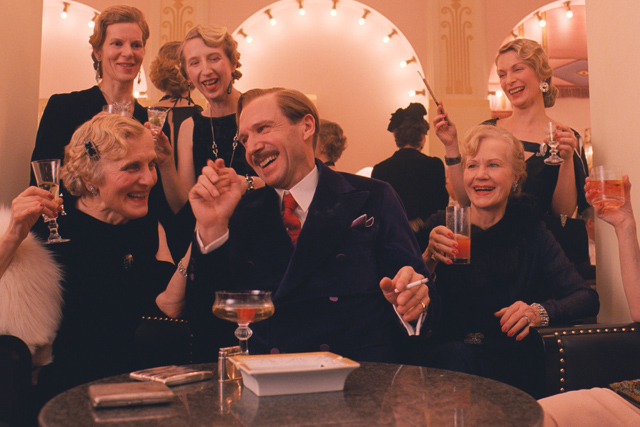 
Writer/director Wes Anderson may not have quite the charming emotional undertow in his latest cheeky, visually palatable offering which on the surface appears to be an ensemble picture (many of whom have worked before for him) that runs like a jarringly glorious toboggan ride. His distinctively quirky artifice, though, in The Grand Budapest Hotel might favor storytelling over characterizations in a painterly, uncanny aesthetic that immerses one at least in the eponymous edifice. It helps when the whimsical stylishness longing to a nearly forgotten time plays out as a well-accoutered murder mystery thanks to the production savvy of composer Alexandre Desplat, lenser Robert Yeoman, and designer Adam Stockhausen.

The partisan director of Moonrise Kingdom and Rushmore envisions a world familiar in a time of political unrest in his fictitious prewar Zubrowka Republic. It centers on a narcissistic, meticulously generous concierge M. Gustave (a delightful Ralph Fiennes displaying more comic capriciousness) admired the hotel's older guests and his much younger lobby protege Zero Moustafa (Tony Revolori). There are numerous time frames appropriated by varying aspect ratios and narrators, including an author (Tom Wilkinson) and an older Zero (F. Murray Abraham).

What develops is another oddly funny, even endearing thriller vivid and untiring at the same time finding momentum off of the mysterious death of one of the well-mannered concierge's typically older paramours, a wrinkly and bewigged Tilda Swinton, who betroths him a priceless Renaissance painting.

Once her greedy son Dmitri (Adrien Brody) and his grotesque henchman (Willem Dafoe) appears, this imaginary nonchalance spryly recaptures some of rapture felt in a winning film like The Artist. Fiennes and newcomer Revolori are managed well in a peppy narrative where his irreproachable means towards the hotel's high standards coalesce with smoothing out the clumsiness of his apprentice. There's even a love interest for Zero in adolescent pastry chef Agatha (Saoirse Ronan) with a geographic facial birthmark.

The Grand Budapest Hotel has an invitingly old-fashioned chase sequence with sledge and skis as each frame expresses much detail as the 'Trans-Alpine Yodel' newspaper covers the coffee tables. The Oscar-nominated actor of Schindler's List and of late in The Invisible Woman and Skyfall in a focused even vulnerable turn is the right central figure in the filmmaker's affectations.

Some noticeable names in disparately diminishing roles appear for Anderson, like Jude Law, as well as Bill Murray and Owen Wilson who were more prominent in The Royal Tenebaums. Those looking for a more descriptive account and perhaps a more agreeable gossamer fable like Moonrise might find a jaunty, insouciant variation on something like Gosford Park which would likely make the late Robert Altman smile from the lingering thoughts on a venerable, finally eroding building.