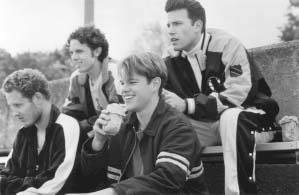 Good Will Hunting is a joyful, dramatic and predictable film.

Will (Matt Damon) is a custodian at the Massachusetts Institute of Technology.  He lives in South Boston and hangs around with three other guys who drink and run amuck.  They haven't grown up sufficiently to take responsibility for their actions.

Will acts as he does because he was abused and neglected as a child.  He is assigned to work with Sean McGuire (Robin Williams) when it is discovered that Will has a world class mathematical mind.  The hint is that only four or five people in the world can understand the universe in mathematical terms as he does.  He is in the same league as Einstein and that is the weak link in the film.  If he were a genius in another skill, it might be reasonable, but it is difficult to understand the expanding universe and be caught up in street fights and beer.

Beyond the difficulties, Williams and Damon turn in bravo performances as antagonists who eventually assist each other in finding the path to the future.

Minnie Driver plays a headstrong Harvard medical student who falls in love with Will and, along with McGuire, change his mind about values in life.

It is interesting that Matt Damon and co-star Ben Affleck, both natives of Cambridge who have been friends since third grade, worked together to produce the script from Damon's 1992 Harvard creative writing project.  The story in the final analysis is one of coming of age, determining what is of value in life and how to leave the adolescent world behind.

It is rated R for strong language.