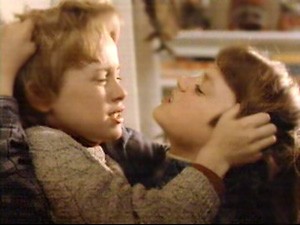 
Macaulay Culkin is the headliner by Elijah Wood (Forever Young) is the star of this taut, tense, well-made story of a bad seed child.

Director Joseph Ruben use winter scenes in Eastern Massachusetts, particularly on Cape Ann, to frame the tension placed on Mark Evans (Wood) when he is forced to live with his aunt, uncle and cousins after his mother dies. At first he and his cousin Henry Evans (Culkin) play together in the woods and streams in the country side. They climb into a tree house, play in snow and run like normal kids.

Mark quickly learns of Henry's amoral violent tendencies. Similar to The Bad Seed which brought an Academy Award nomination to Patty McCormack in 1956, but with a more complex story, drawing Henry's mother (Wendy Crewson, Folks) into the plot as she slowly begins to suspect what Mark knows.

Quinn Culkin, Macaulay's real life sister, plays his sister who is in danger from Henry.

Besides the fine direction, impressive settings and tense story, it is Wood's ability as an actor that makes this film. It is a good, crisp, clean, well-done thriller.