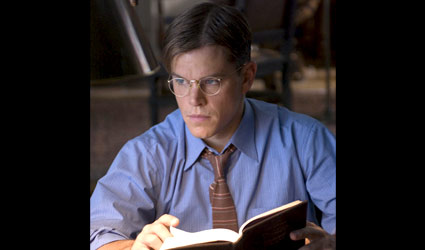 
Matt Damon's Edward Wilson is a chilling cold war CIA agent who can never separate himself from what he believes is The Good Shepherd battling the spread of communism from 1938 to the failed bay-of-pigs invasion of Cuba.

The shadow world of Wilson begins at Yale University where young men are trained with bones and skulls in a secret society, which is not so secret, and is regularly returned to over a lifetime. Wilson misses his small window of opportunity for happiness with Laura (Tammy Blanchard), a deft student whom he loves. But when seduced by Angelina Jolie's Clover/Margaret Russell he is forced into marriage by the dictates of the time when she becomes pregnant. His relationships at home are just as frigid as the cold world he travels in. Throughout the film his only joy appears very early at school when he plays Buttercup in a Gilbert and Sullivan production.

With all the intrigue facing the Earth from the end of World War II to the early sixties failed invasion in Cuba, there is much to draw us into Wilson's life at the secret agency, but The Good Shepherd under Robert DeNiro's direction takes too long to complete the journey. With a script that begins and ends during the administration of JFK we are moved backward and forward through a twenty year period on a tapestry of US spy and cold war history. From time to time the background becomes the point of the story and the anti-hero Wilson falls into the background, just as his human emotions are subdued by his career.

Edward Wilson Jr. (Eddie Redmayne) acts out and lives with a shy sense of fear as he observes the lack of positive emotion between his parents. He is the direct tragedy of the cold, ruthless non-emotional shepherd.

Damon effectively brings us into the dark shadows of the spy agencies and we wonder if he is the hero or the villain. Perhaps he is just a bureaucrat working in torture in the underbelly of the US government. He is successful at his work but a lonely figure in life.

Even when a ship in a bottle leads to betrayal he holds together and marches on until the downfall at the Bay of Pigs which parallels a life that leads to a failure in his relationship with his son.

Following Wilson through time is a worthy, but confusing journey that takes a little too much time to bring the obvious to its audience.