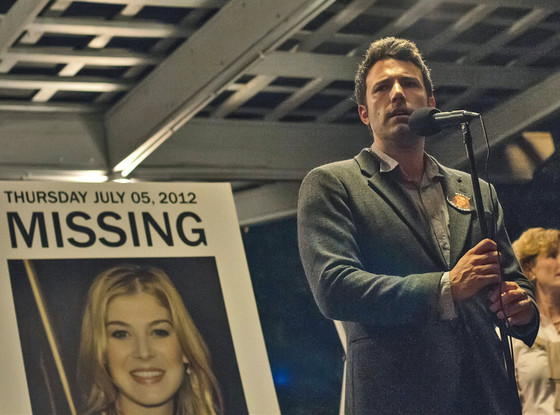 
A skillfully made, observant psychological, arguably Gothic thriller retains the taunting turbulence of Gillian Flynn's huge bestseller even if the final 'solutions' aren't as dauntingly realized as what remarkably preceded it.

An anatomy of a marriage is reflected in Flynn's pungent rendering which could be one of the darkest date movies ever from 'he said (more central), she said' accounts of courtship and marriage, from the present of Nick to the past (fancily anecdotal, with some wry voice-over) from Amy.

You can tell Fincher (The Girl With The Dragon Tattoo-2011, Zodiac) locates the tension when it comes to unsettling mysteries right from the get-go from talking of skull cracking to DNA being taken after a deep first kiss. The atmospheric way the cinematic experience is projected is enhanced by Kirk
Baxter's efficient editing as well as a creepy, jangly score by Trent Reznor and Atticus Ross.

A tough recession left the New York writing couple jobless and in position to care for a terminally ill mother, she for a women's magazine, long after a Midwest-bred pop culture met the daughter of children-book authors who based a popular character (Amazing Amy) after their child. A glib, befuddled Affleck vitiates Nick's charm well after his discovery of a missing wife and smashed coffee table in their Carthage, Missouri abode. Thereafter, detectives Boney (Kim Dickens) and Gilpin (Patrick Fugit) locate blood in the kitchen and a dulled fireplace item which happens on the afternoon of their fifth wedding anniversary.

So, the recreation of their life together led to how Amy set up intricate "treasure hunts" for Nick, how they moved to North Carthage, Missouri to help a dour, retreating Nick and coaching twin sister Margo (a droll, ethically influential Carrie Coon) start a tavern from Amy's trust fund which has an effect on potential marital bliss.

It seems under suspicious circumstances not really leading anywhere some irrevocable anniversary clues were left for Boney and Gilpin to find that doesn't help Nick whose flashy celebrity defense attorney (a sound, cast-against-type Tyler Perry) can't keep his client from tough ensuing unveilings. Especially as talk-show host Ellen Abbott (Missi Pyle) makes Nick more unreliable when it comes to the perception of authorities and family, among others

Obviously it's wise not to further expound upon the culturally minded narrative surprises from Flynn (who got much plaudits for her writing at 'Entertainment Weekly') but it coalesces with Fincher's visual prowess and adroit ominous, sardonic worldview around media jumpstarting and Nick's overall perusal even when she tweaks her text somewhat in the later reels.

There is plenty of gray to go around in this stark, silky transmuting obfuscation with Pike (An Education, Jack Reacher) using Amy's pulchritude in a multi-faceted way that is dynamically shaded in motivational bizarreness in contrast with Affleck's irate and shaken, yet unctuous Nick as the chaperone to turmoil that would probably have Hitchcock grinning with sly delight. It's not really a contemporary counterpart to 80s courtroom thrillers like Presumed Innocent, but the need for justice in addressing relationships here in its twistedly, chilling precision with Neil Patrick Harris as a wealthy debased, sneering ex promoting change puts us on the fringes of societal strain on a supposedly still sacred institution.