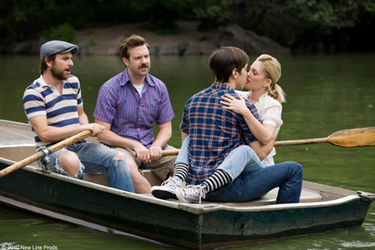 
Drew Barrymore and Justin Long make an amiable couple in this coast-to-coast story of two young adults trying to balance career and romance.

But, a disappointing Going the Distance coming out for Labor Day weekend is flat and coarse even if it's slicked-up in a way attuned to the U.S.'s continuing downtrodden economy.

Their off-screen romance (on-again and off-again after He's Just Not That Into You) may be appealing for some as they "meet cute" over the videogame 'Centipede'. Yet it feels a bit dated as Drew's Erin, a Big Apple newspaper intern and Justin's record company Garrett fall for one another when her summer internship at 'The Sentinel' wraps up. There's the Top Gun posters, Dirty Dancing music and Coney Island bit as the e-mails and texting reflects what's been clear for a while - "the whole newspaper business is falling apart."

The frail storyline, with enough bawdy, snappy line readings, hinges on long-distance complications after Erin relocates to San Francisco with her disapproving sister, a too-straight and brusque germophobe in Christina Applegate and brother-in-law, a nicely put-upon Jim Gaffigan trying to keep their kids in check.

American Teen helmer Nanette Burstein makes the transition to features from documentaries, but mostly in a ham-fisted, unsubtle way which doesn't present the usually adorable Barrymore in a flattering light, especially in some close-ups.

Some of the scenes that garner attention include Garrett trying to survive a tanning salon and dealing with loneliness over the phone in a more thoughtful way than usual. One goofy reunion moment as alluded to in the trailers makes for the most audience response before the nice couple have some hard decisions to make.

Suffice to say, Going the Distance honors its title in a way that really doesn't subvert the rom-com without the sacrifice often seen on the distaff side. Barrymore maintains her likeability in spite of the scales tipping towards the vulgar than the romantic. The filmmakers try to have it both ways and in reaching toward both audiences undercut something more contemporary and appealing on both counts.