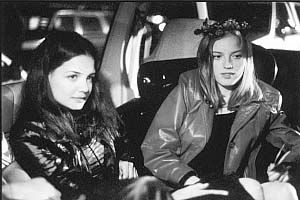 Like a earthworm crawling on a hot surface GO lies on its back, slowly its energy drains away, it  sometimes twitches, but little else happens.

Clair Montgomery (Katie Holmes) and Ronna Martin (Sarah Polley) stumble into a drug deal to pay the rent, they cross paths with Adam (Scott Wolf) and Zack (Jay Mohr), TV actors who are reluctant undercover agents for the LA cops.  It all revolves around Simon (Desmond Askew)  a small time drug dealer.  He is the original target for the cops, but a trip to Las Vegas trips Ronna into the drug trade.

The story is paralleled from the three points of view, Ronna, Marcus, and Adam & Zack.  Each of the characters cross paths and affect the lives of the others.  The cross overs in the story begin with a black screen with the names of the next characters to follow.  Hitchcock blended Karen Black into Family Plot by having her cross the street in front of Bruce Dern's car, simple and clean.  Director Doug Liman strains the connections and twists them into a complex circle of violence.  By the time the third view comes to the screen more than enough has already happened; another view is tedious to contemplate.

The dark comedy revolves around very chancy sex and drug use.  Rather than acting to caution the characters they move like lemmings toward their limited faith, ignoring all the consequences.  The laughs are all at the expense of the sad characters.  In most cases they will end up like the first customer Ronna insults about double coupons; frightened, lost on public assistance and with little hope.  That's not comedy, it's exploitation.

It is rated (R) for nudity, sex and violence.