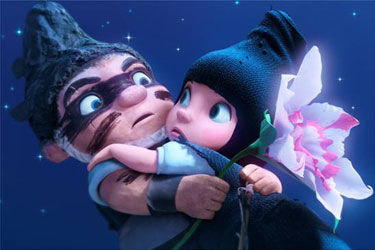 
Tolerable for adults and amusing for children this fleet-of-foot family animation has an ephermal goofiness about it.

It's the blue vs. red in this garden gnome of the Montagues and the Capulets. McAvoy's Gnomeo is the offspring of Lady Bluebury (voiced by Maggie Smith) who falls for Juliet Capulet (Blunt), daughter of Lord Redbrick (Caine). Statham's red warrior Tybalt doesn't take too kindly to Juliet going over to the other garden.

A half-dozen folks helped director Kelly Asbury on the script which wreaks with familiarity into star-crossed lovers planning a secret life together. A stream of sassy, amusing gags with riffs and allusions on the Bard himself who appears as a statue (voiced by Stewart) continually borrow from the Toy Story and Shrek franchises with the "depth of perception" more manipulative than augmenting the plot.

Yet, unassuming audiences may be tantalized enough with the colors and visual effects around the hand-painted garden figures a little weary from the outdoors with much ebullience in the early going.

Younger folks, especially of the distaff side will take to the garden flamingo Featherstone (Jim Cummings) and Nanette (Ashley Jensen), Juliet's BF(frog)F. Like the visual format espoused, what transpires becomes more dim, including much of the sidekicks like Gnomeo's Benny (Matt Lucas). Even through the action which goes a tad overboard in the latter going, the silliness of this kind of romantic animated romp will go down easy enough with all the cute banter and likable characters even with cars and dogs being more ominous when larcenous set-pieces are executed.

With Asbury's Shrek connection this roller coaster of a tit vs. tat also provides spontaneous song and dance moments by way of executive producer Elton John who includes some new tracks collaborated with longtime partner Bernie Taupin as well as perennial favorites. Gnomeo & Juliet has enough of kick (like one of its ninja-like characters) to keep kids amused, but hardly gets more than a ridiculous rise on its way with Shakespeare.