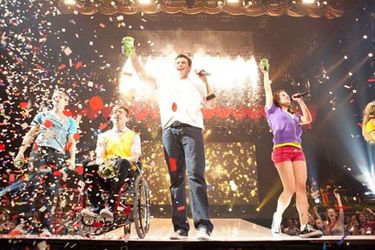 
It's hard not to feel some of infectious joy in this documentary in between seasons of a hit series obviously influenced a little by "American Idol" from the same network.

Glee: The 3D Concert Movie, as directed with plenty of verve by Kevin Tancharoen while needlessly reminding you of the en vogue format, is a pretty enjoyable documentary of singing and dancing diversity with its share of show-stopping performances from high schoolers who find their way to fit in.

'Gleeks' (like an outed 8th-grader, a dwarf, or someone with Asperger's Syndrome), who also are given their moments along with a guest appearance by Gwyneth Paltrow (Country Strong), understand how "everybody can see them in its cast" or as being "quirky weird kids"   in what has become a transformative experience from realizing one's self-worth.

Many noteworthy songs in a toe-tapping feature covered include "Jesse's Girl," "Silly Love Songs," "River Deep Mountain High," as well as "I Wanna Hold Your Hand," "Losers Like Me" and the overdone anthem "Don't Stop Believin."

The emphasis on finding that certain way to express yourself that helps define your uniqueness relies on a youthful passion is related through some of the favorite characters. Included is openly gay Kurt (Chris Colfer) with his subtle vocal panache, as well as the wondrous leading vocalist in Rachel, whose Lea Michele has been strongly influenced by Barbra Streisand.

There's the simmering grace of Blaine (Darren Criss) who's part of a rival choir The Warblers and imitated to a tee by young boy with quite the stage presence.  It's hard to neglect the talents of Mercedes (Amber Riley) who can spiritedly belt out rock, soul and gospel tunes, while Brittany (Heather Morris) has the alluring gyrations and look of a Britney Spears. And, Kevin McHale as Artie who's confined in a wheelchair has a fine fantasy sequence where he gets to strut.

This gratifying big-screen Glee consistently percolates reflecting the cast's popularity even on the Billboard charts through individual medleys and lively group numbers. For a concert movie (with fine lyrics and choreography) with some interesting backstage goings-on, it's hard not to see why many have embraced their inner-'gleek' and others to start doing so after watching folks like them soaring from the foreground.