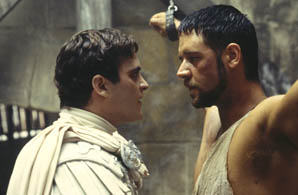 Over two decades ago, Ridley Scott directed Sigourney Weaver in the science fiction thriller Alien which made her a star.  Now, with the strength and vigor of Russell Crowe as a once great Roman general named Maximus, the visionary director and valiant star team up to restore a once formidable historical epic belonging to the Roman Empire, to ensure Gladiator the first truly glorious and most compelling picture of 2000 A.D.

Busy now as a producer even with the challenge of directing the eagerly awaited Hannibal, Scott skillfully establishes Gladiator to have the brawn, the spirit, the look, and the bloody spectacle of battle which will become a mainstay of filmgoer's personal archives for years to come.  As Mel Gibson penetrated so many with his internal and physical grace and force as freedom fighter William Wallace in Braveheart, Crowe is never less than grand as his mental prowess is steadfast within his dynamism of corporal brutality.  It all blossoms majestically throughout as Scott shoots with darkened shades as Maximus reflects of his life, away from the fields of his dreams with his wife and son.

Set during the latter stages of Rome's dominion, which extended from Africa to the northern reaches of England, Gladiator begins in the lush brushes of Germania as the army of the emperor, Marcus Aurelius (Richard Harris), led by Crowe's General Maximus unleashes hell on a swarm of barbarians with a barrage of flaming arrows and canisters that engulf their shielding forest in flames.  Scott captures the mesmerizing action, in varying speeds, in rough shades to highlight the feral sequence that unfolds like Monet painting an ambush.

As the aging emperor, revered greatly by Maximus, names the General, a Spaniard who aches to go home, to be a successor in a city he's never seen, the emperor's cruel and unstable son Commodus (Joaquin Phoenix) in a fit of jealous rage takes his father's life, and decrees Maximus to death.  Commodus' comely older sister, Lucilla (Connie Nielson) looks on with gravity, as she has had a relationship with the now doomed general.

With febrile tenacity, his shoulder impaled prior to an escape he finds his home plundered and family savaged, Maximus derives strength from recollection of his distant family, and his belief  which transports him through sorrow, as he becomes a slave who later becomes a gladiator under the tutelage of a former warrior, Proximo.  Performed with panache and pungency by Oliver Reed, in his last screen role.

As Gladiator exerts its vitality from Maximus and Scott's recreation of Rome in 180 A.D., the screenplay worked on by David Franzoni, John Logan, and William Nicholson serves this extraordinary tale of revenge and courage with political machinations fueled by the effect of a gladiator who rises in Proximo's arena to the prestigious Colosseum.

The bestial, graphic, furious action is appropriated in Rome's famed Colosseum, as Maximus teams up well in combat with, among others, the African named Juba (Djimo Hounsou of Amistad) in an effective cerebral turn.  Though the action sometimes is jagged and tension dominates every frame of the brutal contests, Scott jump cuts to avoid excess.

Filmed in London, Malta, and Morocco, Gladiator never staggers from its massive undertaking.  The CGI effects enhance the magnificence of the Forum and the Colosseum as a spectator's paradise and the wide-screen nicely shadows the vicious activity, especially in the super stadium, with herculean foes and tigers on the prowl.

Obviously, in letting the games begin in an era almost 2000 years hence, Scott's pulsating, visceral re-creation of a general who defies an empire triumphantly immortalize Gladiator and Crowe as an eloquent battle scarred hero certain to win the crowd.