The Girl with the Dragon Tattoo 2011 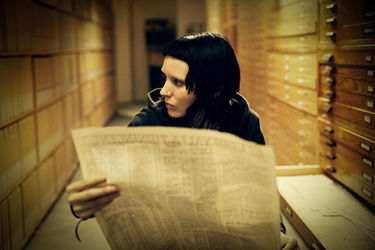 
The maker of Se7en and Zodiac is unrelenting and deliberate in weaving a haunting depravity in this U.S. remake of a Swedish geographical 'locked down' mystery (from a riveting Stieg Larsson trilogy).

David Fincher puts his own shrewd, severe stamp on The Girl With The Dragon Tattoo, maybe only lacking in how much it shows - sleuthing wise towards an 'anticlimax' versus an original which was a little more sleek and subtle. But, for fans of a huge (digitally downloaded) literary export, this is probably splitting hairs in a starkly scintillating film starring Daniel Craig, Rooney Mara (sister of Kate and born into the family of the New York - football - Giants), and Christopher Plummer.

An unhurried, convoluted tale involving deep misogyny and cruelty attached to racial and religious elements takes hold within a gelid, remote Swedish landscape crisply rendered by lenser Jeff Cronenweth. Craig is disgraced  magazine reporter Mikael Blomkvist entrusted by the client of Milton security whom Mara's young woman Lisbeth Salander is under semi-employment as an I.T. person known for her hacking. Retired businessman Henrik Vanger, well played by Christopher Plummer (Beginners), is desperate for Blomkvist to find out what happened to his grandniece of a teenager, Harriet, nearly four decades ago. She's been running a 'check' on Mikael for the company while dealing with personal demons in being remanded by the state for a horrific arsonist act.

Lisbeth is a punkette of an urchin-like heroine, a kind of sociopathic Clarice Starling, who has a guardian, and built up a brutal backbone from the incessant iniquities perpetrated on her by men (the film's original title translated as Men Who Hate Women). Esteemed scribe Steven Zaillian (who wrote the recent sports drama Moneyball) sets up some crucial interactions as the bright, but burnished Lisbeth tries to get hold of her life through a gradual union with Mikael on a search into a murderous past. A connection occurs after delving through old newspapers, files, and photographs with Harriet's vanishing and the sadistic demise of a series of young women.

Craig has more of a saturnine gumption than in recent roles (notably his latest incarnation of Ian Fleming's 007), playing well off of the avenging, black leather-clad, heavily-pierced Mara who invests the role of a tortured soul with a convincingly feral, brooding presence (which Noomi Rapace, in Sherlock Holmes: A Game of Shadows, did with her own, persuasive incendiary grace). Even before their characters (hers filled with cynical detachment) reluctantly coalesce, they've already begun to captivate the viewer.

The scripting may glide around implausibilities in ways that a surgical Fincher senses like erupting magma. One is luridly drawn into the abuse and retribution (that won't sit particularly well, especially with those close to what has happened in College Football and Basketball this fall) with a perverse twist that will have many wondering what shred of humanity Lisbeth has left in her. Some well-chosen backup besides Plummer puts Robin Wright and Stellan Skarsgaard opposite Craig as Mikael's paramour of a boss, and a less vicious Vanger member, respectively.

Ultimately, under Fincher's tactile guidance, the way Mara maneuvers a calculated, if merciless zeal from Lisbeth's trauma, along with a cool Craig, helps transform The Girl With The Dragon Tattoo into a controlled, fearsome, and shocking drama. One that powerfully plunders through a dark, disturbing world (however timeworn) that includes corporate skullduggery vital to Larsson's remaining sinuous story lines.