The Girl with the Dragon Tattoo 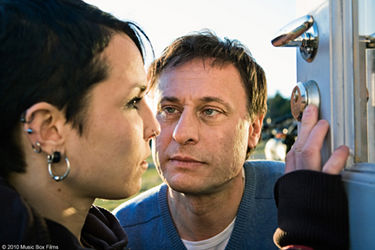 
Snarky, chilling, and even a bit wry when appropriate, this adult Swedish thriller adapted from Stieg Larsson's first novel in a trilogy is almost as cool as the titular imprint.

The Girl with the Dragon Tattoo (in Swedish with English subtitles) stars Michael Nyqvist and Noomi Rapace and is rather riveting given its rangy convoluted nature. Even with some continuity and anachronistic goofs.

Reporter Mikael Blomkvist (Nyqvist) is facing prison time in half a year on the wrong end of a libel case. Upper-class elderly recluse Henrik Vanger (Sven-Bertil Taube) retains him to investigate an arcane mystery in his background pertaining to a 40-year-old case of a missing 16-year-old named Harriet.

A sleek young woman, an elusive Lisbeth Salander, done with dynamism by Rapace, is on his trail, then joins up with him. What they uncover connects in an eerie way to homicides long-ago.

This perceptive, constantly involving thriller from Niels Arden Oplev has deep misogyny and brutality in its backbone as flashbacks lets us into Lisbeth's very unpleasant past. Part of its graphic nature includes Lisbeth's meetings with her parole officer (Peter Andersson).

There's more than cruel chauvanism which leans into racial and religious indignation, as well as Nazism as the horrors simmer to a boil. Oplev works in a sly, fastidious way to darken things as the characters and places are strongly set. From the identification of grainy photos of Harriet when she vanished in the archives of a local newspaper, the sprawling viciousness on view isn't really as gratuitous as it appears. Most in part due to the interest of the relationship of Mikael and Lisbeth, two damaged folks who need one another when a scandal has them in its grip.

The Girl with the Dragon Tattoo is the kind of meller that meets its sprawling length and its antecedent viscerally head-on. It's done with a stark, ugly intimacy with Nyqvist and, especially, Rapace, who makes Lisbeth's prowling, avenging hacker memorable, leading the way. With plenty of twists, this sinister accomplished thriller is as shadowy and insinuating as the lensing as the original title translated as "Men Who Hate Women" comes to suffocating sensible fruition.