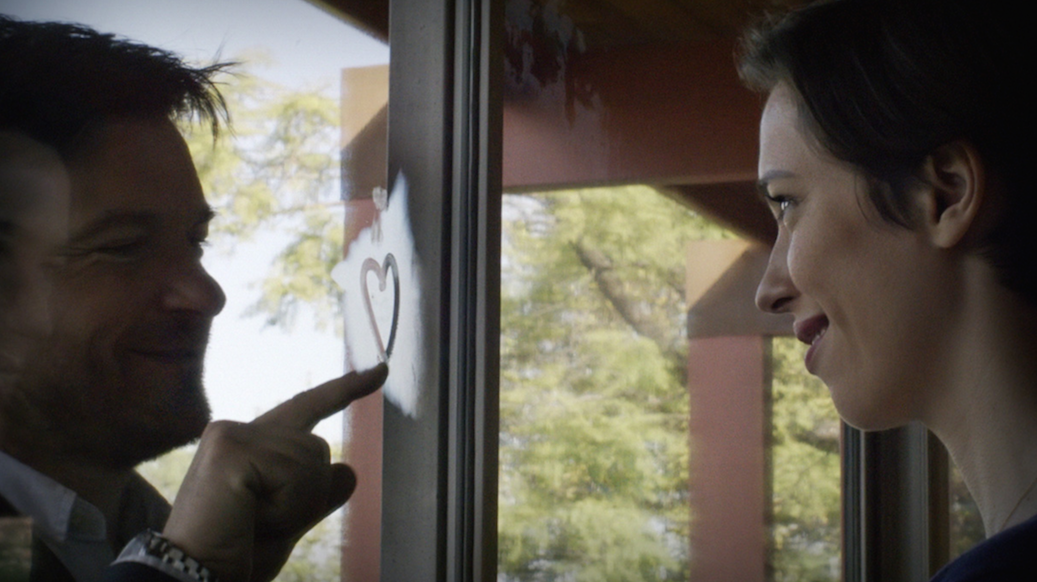 
The Gift is a thriller.  It is not filled with violence and or blood, but the quality script, fine performances and solid direction keep us on the edge of our seats through out.

Joel Edgerton directs himself as Gordo a character that inserts himself in the life of Simon (Jason Bateman) and his wife Robyn (Rebecca Hall)  Simon and Robyn arrive in California to accept a better job than the one he held in Chicago.  He is very successful and the couple purchase a spectacular new home, and ride in a Mercedes as Simon plans for his next step up.

Gordo connects with the two perhaps by accident, but may-be not and begins to bring gifts to their home.  He also begins to stop in when Simon is at work and Robin admits she has sympathy for him.  Rather quickly Simon decides he does not want Gordo, who he calls Wierdo Gordo as a part of their lives.

From that point we are not clear as to what is going on in the minds of the three main characters.  Robyn continues to do some work at home but she is concerned with her inability to become pregnant with their first child.  Her time spend doing research late in the film helps to bring some clarity  to the twisted plot but it is never obvious.  Rebecca Hall uses her eyes and facial expressions to tell what is happening in her mind, she is Initially full of life, happy and anxious to begin a new life in California. Time and her suspicions wear her down.

Simon appears solid and has a clear path to promotion and greater wealth and respect at work.  He holds that atmosphere until the climax when many of the secret are revealed.  Edgerton's Gordo is a shadow figure with strange looks.  He is the kind of person we would just not want to hang with.  Again what is in his head is not at all clear.

Eventually we learn Gordo and Simon were high school students together when an event spoiled Gordo's life.  From there on we follow a pealing back of information stacked like strata in a geologist's life. Each level gives us more information but we continue to be unsure of what is fact.  Each situation is enhanced be a plunking and pounding sound track that adds to the edginess of the atmosphere.

The three performers move forward as their backgrounds become more clear and more interactive.  We learn the old high school wounds have never healed and revenge continues.  But who has the right to revenge is not clear.  Is the final gift the best revenge or is it just another dead end story line which just hangs there. The point here is that once the idea is proposed it doesn't matter if it is true or not and the damage is done.

The Gift is an emotional treat.