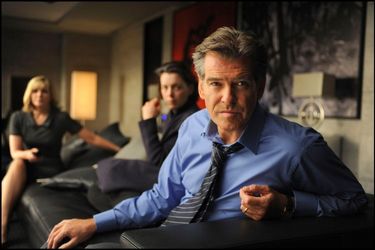 
The controversial, acclaimed Polish-French filmmaker Roman Polanski (The Pianist) seems to have better luck behind the camera these days as evidenced by The Ghost Writer.

The sly, edgy political thriller from co-scribe Robert Harris's own novel of the same name stars Ewan McGregor, Pierce Brosnan, and Kim Cattrall. It was filmed in early 2009 and finished during Polanski's house arrest in Switzerland. This intriguing adaptation centers on a ghostwriter (known as the Ghost - McGregor) retained to finish the memoirs of a former/unseated British prime minister who uncovers secrets that put his own life in jeopardy.

Brosnan's sometimes icy, yet charismatic Adam Lang, is in exile in a coastal abode on an island off of Cape Cod (read the setting of the twisty Shutter Island) since being accused of war crimes in England. Those who've read Harris's bestseller realize the similarity of Lang to Tony Blair as the screenplay assisted by Polanski from a leak memo insinuates the approval of the rendition of two suspected terrorists arrested in England to an unspecified location for torture resulting in a fatality.

Polanski finds some wanton, taut rhythms as he substitutes Berlin for London and North Sea island of Sylt for the once stomping ground for Jaws. It's one of the better parts for McGregor who has a much more resonant storyline line than in tantalizing claptrap like Eye of the Beholder. The Ghost soon realizes that completing the task is far different than what he's done for trashy celebrities, especially those in the rock scene - honing their prose or putting words in their mouths. And, the writer who began the book has been found dead after an unsatisfactory, prosaic first draft was Lang's long-time aide.

So, Polanski with his cast and crew, along with Harris, know how to tighten the grip from a pre-programmed GPS to a challenging surprise with a race with the Ghost riding a ferry. The key is the audience is along for the ride in the Ghost's shoes as one is drawn from the media sensation as Lang tries to salvage his reputation in Washington D.C. One feels the capriciousness of earlier Polanski hits like Rosemary's Baby or even Frantic with Harrison Ford, along with the paranoia of the zeitgeist in Sydney Pollack's Three Days of the Condor.

Besides the pitch-perfect Brosnan who is really wry and impassioned opposite a curiously entitled McGregor, good performances abound in roles by the likes of Timothy Hutton (TV's "Leverage") and Jim Belushi as Lang's U.S. attorney and the Ghost's prickly publisher, respectively. Tom Wilkinson brings an obscure allure to a Harvard law instructor who may be privvy to Lang's clandestine nature while Robert Pugh energizes a former member of Lang's cabinet. And, Olivia Williams (the sound English private school teacher in An Education) scores as Lang's wily, seductive wife with England native Kim Cattrall fine in the role of an executive assistant - a nice contrast to her candid PR lady Samantha Jones from Sex and the City.

The Ghost Writer is a knotty, well-modulated mystery made to chilling effect that demonstrates a filmmaker's skill for the mad rush to obfuscate and shoe horn the orbits of showbusiness and politics.