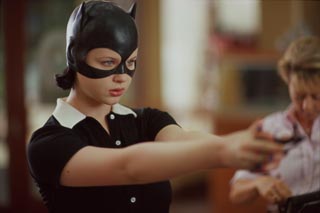 Ghost World doesn't have a ghost of a chance at the box office, but this wonderfully offbeat adaptation of Daniel Clowes' underground comic book by Terry Zwigoff (Crumb) is appealingly satirical and rebellious but often humanistic.  And as fresh as the story is, Zwigoff gets layered performances from Thora Birch (American Beauty) and Steve Buscemi (Armageddon).

Zwigoff's quirky, but amazing Crumb was a documentary that dug deep into a dysfunctional family which was rooted in comic strips and his collaboration with Clowes gives Ghost World dimensions that few films about teenagers ever do, especially those early days around high school graduation when the film begins.

Strongly textured in form and production, Ghost World brings one closely into the lives of two of these graduates, acted intelligently by Birch and Scarlett Johansson (The Horse Whisperer).  They deride the environment which envelops them and the paradox of irony of the girls entering adulthood doesn't really permeate into the story.

Birch's Enid and Johansson's Rebecca want to be working girls and share an apartment, yet Enid is a bit too sharp tongued to stay employed when being bluntly honest about the quality of movies in a multiplex.  Enid is with an amiable, liberal dad as played by Bob Balaban and his diverse cultural interests, especially in 1960's India musicals, as the more mature Rebecca isn't always the leader in their misadventures.

Ghost World becomes more intriguing with their mischievous response to a personal ad by phone and that draws Buscemi's reclusive sort, Seymour, into a 50s styled diner as they observe a wistful embarrassment.  Yet, Enid is lured by this lonely fellow and the girls get his whereabouts from a convenience store clerk (Brad Renfro) whom they both have a crush on and bother him when he's working.

When they visit Seymour, Enid starts to become fond of a man who rambles about obscure blues music and loves vintage 78 records while "not relating to 99% of humanity."  Seymour's sardonic, ill-tempered expressions are kindred to Enid and he allows the world-weary girl to play matchmaker for him.

Then Enid's response to a summer art course, taken in order to meet graduation requirements influenced by Ileana Douglas' free-spirited, politically-correct frizzy-haired instructor gets her into trouble with the exhibition of racism as " found art."

The thoughtful script finally centers on Enid and Seymour as Rebecca becomes distanced from her girlfriend.  The idea of living with a 40-ish guy enters Enid's head and after sex and contemplation Zwigoff lets Birch add more subtlety to a young woman looking to break free from a world of discontentment.  In the end, Ghost World morphs to a degree from its caustic humor but the tone maintains a sharp imprint in realism that keeps the viewer alert to the pathos surrounding Enid, as Birch goes beyond her estranged daughter in American Beauty.