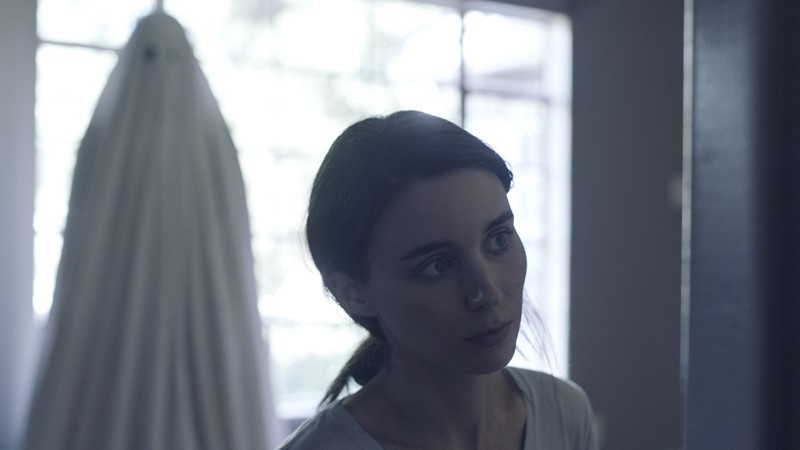 
Unconventional supernatural tale from David Lowery (Pete's Dragon, Ain't Them Bodies Saints) reunites two of his co-stars of the latter feature, Casey Affleck (Manchester By The Sea) and Rooney Mara (Lion, Carol). One that probably wouldn't be an ideal night out with your significant other.

The passage of time is felt in A Ghost Story in a high-toned metaphysical manner that recalls auteurs like Terence Malick. In its pacing and presentation which has unexpected resonance without current technology the on-looker may be treated well for having an (understanding and open-minded) perspective.

Love, loss and grief come to the forefront after briefly meeting a couple (Affleck - a musician, Mara) in a comfortably intimate posture as the 30-ish husband succumbs to a car wreck. How he emerges from the morgue may elicit some chuckles — in a white sheet with two dark holes — opting to return to his home in back of a nice front yard. And, become a haunting presence of sorts.

A certain communication within poltergeist activity will exist but not as remembered in more mainstream examples of the genre, as in 1989s mainstream romantic fantasy thriller directed by Jerry Zucker Ghost which starred the late Patrick Swayze, Demi Moore, and Oscar-winner Whoopi Goldberg.

Unfortunately, what comes with this territory that expresses a deepening wistful sense is his widow's departure, other renters and owners, finally it's razing to allow for office edifices. Affleck (without really seeing him very much at all) provides the portal for the wretchedness, detachment and longing that is rather palpable in an outré, cosmic context. With orchestral sounds complementing the hazy, if unobtrusiveness of scenes and character.

Lyrical cinema very unhurried and uneventful still has much within it even if style would appear to dwarf substance on a cursory level; Mara is quite good in a difficult part too as an oddly memorable scene has her eating a whole pie. Lowery's bold vision may be perceived as a strange meditation on life, but it is an intriguing, inscrutable fascination not just into loneliness as a drug-addled singer/songwriter (Will Oldham) impacts the overall spare aura with poignancy.